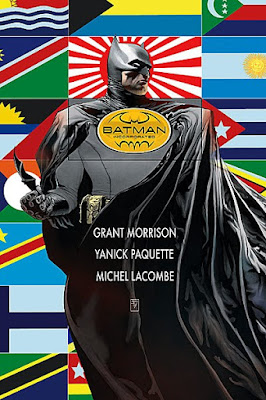 Short, maybe SPOILERY reactions to recently read (though not necessarily recently published) comics. Haven't had a lot of time to type about the funny books since I started grad school, but I'm still finding the time to read 'em.

Batman & Robin #s 17 & 18 - Paul Cornell steps in to bridge the gap between Morrison and... well, I forget, but the person slated to take over after Morrison, and does an admirable job in the first two parts of this three part story. Dick-as-Batman, now in the groove and with a lot of the pressure off now that Bruce is back reminds me of the Batman I remember when I first started reading comics, serious but not beyond humor, and Damian is such an entertaining little shit as Robin that he's fun to read. Cornell handles them both well, and in The Absence creates a creeeeeepy villain who fits in well in the book that earlier gave us Professor Pyg and The Flamingo. Scott McDaniels' art is inconsistent at best, and sometimes just wrong for the story, though.

Batman Incorporated #1 - Wasn't planning on getting this, but it had good word of mouth, and now I think I'm onboard for the series for a while. Turns out I really, really missed International Man of Mystery Batman... who knew? I also hope Catwoman is kept as at least a semi-regular member of this book's cast, because she works quite well in the globe hopping crimefighter setting. Plus, Morrison gives her the best gag of the book, paid off in a climactic punchline I should've seen coming but didn't. And Yanick Paquette's artwork... yeah, that's the stuff. Detailed without looking slavishly copied from photo sources. I think I'm gonna dig this.

Batwoman #0 - Loved the hardcover collection of the Greg Rucka/J.H. Williams III stories from Detective Comics, so I figured I had to give this a shot (even without Rucka). And while I liked it, I wasn't thrilled that we're seeing and hearing everything about Kate Kane in this story from Bruce's perspective, so I'm still not sure how Williams handles Kate's voice. Gorgeous art, though, from both Williams and Amy Reeder, whose work I was only kinda-sorta familiar with before, and now I see I need to correct that shortcoming ASAP, because her stuff was outstanding here.

Stan Lee's The Traveler #1 - Coming off of the Lee/Paul Cornell Soldier Zero, I had high hopes for this one, written by Mark Waid, but it fell pretty flat for me, largely due to the dialog, and that really surprised me. Waid is usually great in that department, but what was supposed to sound zippy and clever just came off as too glib for my tastes. At first I thought he was trying to channel his inner Stan too much, but then I remembered that he wrote one of my favorite runs of Fantastic Four - and what's more Stan than FF? - and never had that problem. I don't know.

Tiny Titans / Little Archie #s 1 & 2 - So you know how a familiarity with the regular Teen Titans helps bring an additional depth to Tiny Titans? Familiarity with both Bob Bolling's Little Archie stories and the greater Archie world in general helps here, too. It's all very fun and very, very cute, but if you don't know who Pureheart the Powerful or Mad Doctor Doom (no, not that one) & Chester are, you might be scratching your head a little. The goodest, cleanest fun in funny books, though, no question about it. Read 'em and pass 'em on to some lucky kid in your life.

Green Lantern: Secret Origin TPB - I've been trying to give both Geoff Johns and Hal Jordan another chance, so I grabbed this from the local library, basically expecting Hal's origin story tweaked and retrofitted to fit in with the whole Blackest Night event I knew it lead into, and that's exactly what I got. I mean, it was decent, and points to Johns for granting Hal the self-awareness to know he was an egotistical asshat of a character, but still, it hits all the beats you'd expect it to, and once you swap out Legion for Atrocitus and daddy issues expressed through carelessness rather than daddy issues expressed through alcoholism, it isn't all that different from Emerald Dawn. So I enjoyed it well enough, sure, but it didn't really bring a whole lotta new to the party.

Green Hornet (Now Comics) Vol. 1 #s 1 & 2 - Thanks to the movie trailers and the giant 35 cent sale DCBS had on various Dynamite Comics GH series last month (in which I bought 20 comics for $7... hard to pass up a deal like that, and way cheaper than the 3 or 4 trades that would collect this stuff), I've had Hornet on the brain and decided to revisit the Now Comics series I read sporadically and enjoyed as a kid. Though I never read the first two issues, as they were expensive back issue gets once upon a time ago, so finding them now as dollar bin fodder was outstanding. And the story by Ron Fortier was great, too, setting up the legend of the Green Hornet legacy all Starman style, incorporating both the radio and TV iterations of the character and laying the groundwork for the third Hornet, Paul Reid, who would come a bit later in the issues I was familiar with. And points to Fortier for a few sneaky "we don't have the rights but, you know, *wink*" references to the Lone Ranger, the Reid family member who started the whole masked avenger thing back in the 1800s. Fun reading, well worth checking out if you find 'em, and #1 has a Jim Steranko cover to boot.
at December 20, 2010
Labels: Archie, Batman, Batwoman, Green Hornet, Green Lantern, Mark Waid, Readin, Stan Lee, Tiny Titans
Newer Post Older Post Home