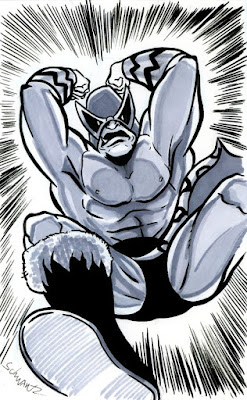 This sketch, obviously depicting the last thing B'wana Beast's opponent of the moment sees before being knocked into unconsciousness, was drawn for me by Michael Schwartz, creator of the undersea action & adventure web strip Oceanverse. Mike also drew this Aquaman for me a while back (which still gets hits regularly thanks to links from Tegan and The Aquaman Shrine), so apparently I'm having him draw characters that the Batman: The Brave and the Bold cartoon has made cool again*. That wasn't a conscious decision, but clearly it seems to be working, because he keeps knocking these out of the part. Thanks, Mike! And everyone else, go read Oceanverse!