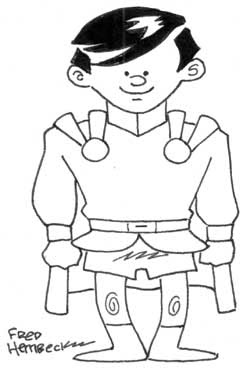 Mon-El, the Legionnaire who, despite being nearly killed by Superboy in his first appearance and then was condemned to 1,000 years in a non-corporeal hell with some of the worst criminals in the history of the universe while Clark utterly failed to help him, managed to remain surprisingly upbeat, as rendered in curly-cued glory on a sketch card by Fred Hembeck. Thanks, Fred!
at November 14, 2010
Labels: comics, DC, Legion, Pretty Sketchy, Superboy