Some quick reactions to recently read comics. Maybe some SPOILERS, so read with caution. 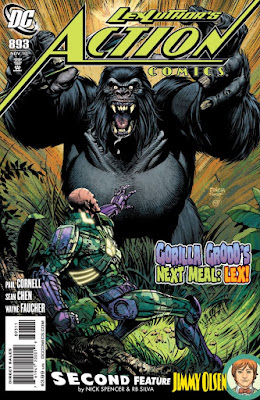 Action Comics #s 890-893 - I was disappointed that Superman was going to be sent on walkabout and therefore unable to be used by Paul Cornell for this run, but now I'm actually kind of glad, because this storyline about Lex Luthor's world tour (of EVIL!) in search of Black Lantern rings might be the best thing DC has going right now. Brilliant, even Maggin-esque characterization of Lex, a great supporting cast (especially his surprising for so many reasons right-hand woman), and some truly interesting clashes with some of the DCU's best baddies (I thought it would be hard to top Mr. Mind, but Gorilla Grodd and his battle spoon takes the cake). And this Jimmy Olsen back-up running right now... very much looking forward to seeing where that goes, and I already hope they really do plan on giving it a proper ending somehow, somewhere when the co-features go bye bye in January. 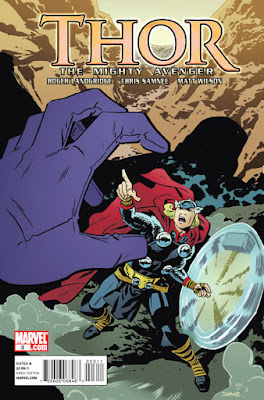 Thor the Mighty Avenger #s 1-5 - As much of a mythology junkie as I was when I was a kid, I never really warmed up to Thor that much. I liked individual stories here and there, sure, especially during the Simonson run, but I never liked the series or the character enough to follow along regularly. This book, though, is fantastic, and significantly more charming that I was prepared for. Roger Langridge writes a Thor story that seems, you know, Vikingy enough for the traditionalists, but fills it with a lot more heart than I'm used to seeing in the character and his universe, too, and it's all the better for it. I'm loving his takes on other Marvel characters, too, particularly Giant-Man, Wasp, and Captain Britain. And as for the art of Chris Samnee, man... I know he has his share of fans now, but if this guy isn't positively HUGE in a few years time, than there's no justice in the comic book industry. He is a major, major talent. I cannot recommend this book enough. 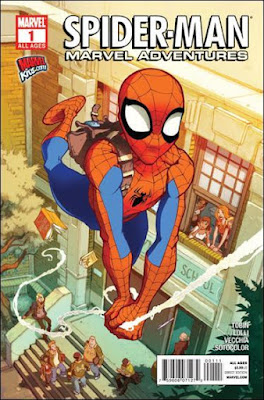 Marvel Adventures Spider-Man: Amazing tpb/digest - I've said it before, I'll say it again: Paul Tobin writes what is probably my favorite Spider-Man ever. Fun stories, compelling ongoing plotline, and a terrific supporting cast - it's everything you've always loved about Spider-Man, while still enough of its own thing to feel like it's not just revisiting well-tred territory. Also, Sophia "Chat" Sanduval, the mutant who can talk to animals, is my favorite Parker love-interest of all time. Gwen who? Mary Jane what now? Fun comics as you like 'em.
at October 26, 2010
Labels: comics, Lex Luthor, Readin, Spider-Man, Superman, Thor