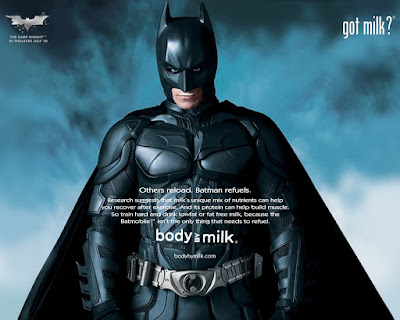 I've recently had the opportunity to rewatch both Batman Begins and The Dark Knight. My first time through both movies, they left me rather cold. Technically sound, certainly, and each movie had its share of scenes and performances I enjoyed - for instance, I can't imagine a better Jim Gordon than Gary Oldman, and while I've never been a big Joker fan, let's face it, Heath Ledger pretty much redefined that character forever - but I just didn't see The Big Deal. And for A Certain Type of Fan (a very large, vocal number of the Certain Type of Fan Brigade, actually), these movies were very much the Biggest of Big Deals. The Christopher Nolan Bat-movies were more than just Really Good Batman Movies, they claimed, but masterpieces of modern filmmaking, the sort of films that revolutionized the art of cinema, cured cancer, ended hunger, and kicked a whole lot of ass.

Those are some lofty expectations for any movies to live up to, especially when you don't see them on DVD. See, Batman Begins was released the day before my son was born, and seeing as the wife was so very, very pregnant at the time, we weren't really willing to risk the trip to the theater in case labor kicked in partway through the movie (hey, those tickets are expensive). And The Dark Knight, well, we found the time to get to the movies maybe twice that summer, neither of those times at a point when the movie was actually playing, and because of that, it just never became a priority. So both movies had to wait until several months later when the Netflix stork left the red envelope in our mailbox. And by that time, of course, the movies had so much hype surrounding them that there's no way they could hope to live up to it.

I suppose I could've ignored the hype, but for one, I'm not really wired that way, and also, I think even the Amish knew about all the hubbub surrounding these movies, so there was no real way of escaping it. And hype leads to expectations, and expectations are where everything falls apart. A friend of mine refuses to listen to recommendations of any kind for just this reason. He wants to approach everything fresh, and the second someone recommends something, he expects too much, and the product is inevitably ruined. I should really take a page from his book, because in so many cases - these movies being big ones - the product doesn't live up to the expectation.

So cut to a few years later, the hype as receded to manageable levels, and I'm willing to get over my expectations (and anger at Nerd-dom Collected for ruining the films for me before I could even see them) and give them another shot. And this time around, I had to admit, they were pretty damn good. The film genre wasn't changed forever, cancer certainly wasn't cured, but they were, indeed, great Batman movies. Not perfect, they still had their share of problems. The Dark Knight could use two or three fewer subplots, I think, and while I see why they pushed Two-Face in the film, I still wish they'd have held him off for movie #3. Bale's Batman voice is, of course, too silly to take seriously. But mostly, I don't like that they seem to have forgotten the detective aspect of the character. They nailed the whole urban ninja thing, but I really dislike that the bulk of the intellectual heavy lifting is handled by Lucius Fox and Alfred. All kinds of heroes kick ass, but one of the big things that separates Batman from, say, Wolverine, is that detective skill. Maybe this will play a bigger role in the third movie, since we're still very much seeing a Batman in training.

I'm looking forward to seeing that third movie now. A year ago, I wouldn't have been able to say that. But in the end, I still prefer a Batman of another variety.