Most of the reading I've been doing lately is on the topic of library and/or information science, but you probably don't want to hear about that. Here are short reactions to a few comics I've been able to fit in lately, though. Maybe some SPOILERS. 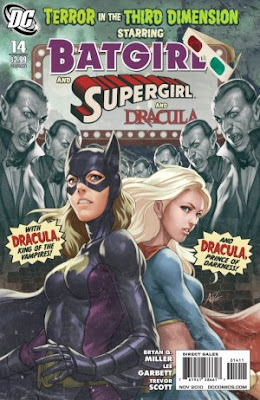 Batgirl 14 - I'm a sucker for "superheroes hanging out" stories, especially when they deal with something really bizarre. Batgirl and Supergirl wandering around the Gotham University campus hunting 24 Draculas who've stepped straight out of a movie screen? Yeah, that'll do nicely. Lots of great dialogue here. Maybe I need to check this out more often. It and Red Robin were certain a lot more fun than I ever would've thought.

Batman & Robin Vol. 1: Batman Reborn - Typically I've found that Grant Morrison Batman collections start off strong, but when the artist drawing the first arc leaves, the quality of the story drops off dramatically since the second artist can't keep up as well as the first, who is usually one of Morrison's better collaborators, anyway. But when Frank Quitely (arguably Morrison's best partner in story) gives way to Philip Tan, the drop isn't as hard to take this time. I don't think the Red Hood/Scarlet/Flamingo story is as good as the initial Dr. Pyg three-parter, but the transition flows well enough. I really enjoy reading Dick and Damian as Batman and Robin, enough so that I'm kind of sad Bruce Wayne is back in the current issues.

All Star Superman Vols. 1 & 2 - Finally picked up the trades and re-read the entire run in about two sittings. Yeah, it all still holds up as some of the best Superman storytelling ever. Reading it all in succession, though, does show that there's a bit of a drop in story quality as the first half of the second volume begins, with the Bizarro two-parter and the story with the other Kryptonians. Those are still decent, but coming between the two best issues of the series, Superman's return to Smallville in #6 and the "day in the life / last will and testament" story in #10, well, those are hard to match, qualitywise. If you haven't read All Star Superman yet, what the hell are you waiting for?

F**k you, box - I generally don't like cats or cat-related humor, but this mini-comic by Katie Cook is pretty damn funny. This cat is surly, malicious, and incredibly profane. So, you know, typical cat. And to see it all coming out of the cutest of cute drawings makes it funnier still. Check this out if you get the chance.
at September 20, 2010
Labels: Batgirl, Batman, Grant Morrison, Katie Cook, Readin, Robin, Supergirl, Superman