Shortish-reactions to recently read, though not always recently published, comic books. There may be some spoilers, so read on with caution. 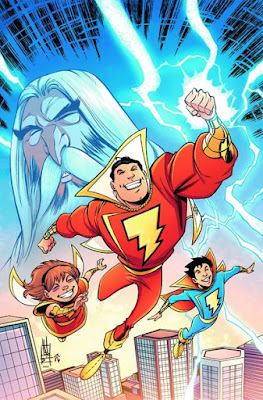 Billy Batson and the Magic of Shazam! #19 - As you can see from the cover, this series' version of Captain Marvel, Junior makes his debut, and as a payoff moment to the story, it is handled very well. Unfortunately, the issue on the whole felt a bit off. It picks up as Mary and Tawny try to save Cap after a fight with a new villain has supernaturally aged him, leaving him feeble and on the verge of death. Except the way this is told makes it seem less like something that happened off panel and more like a "for those who came in late" flashback to the previous issue, and nothing like that happened in #18. So the whole time I read this, I kept wondering if I somehow missed an issue, and it turned out that I did not. Now I'm wondering if this was a storytelling decision on Art Baltazar and Franco's part that didn't quite work out properly, or if the story alluded to here was supposed to be the original #19, and it got scuttled (and left only as a flashback) so that they could wrap the book up in time for it's final issue, #21. 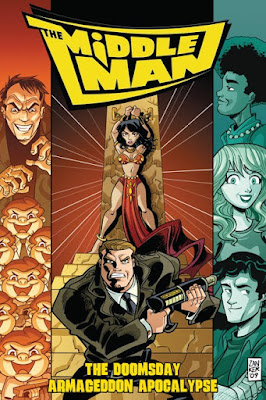 The Middleman: The Doomsday Armageddon Apocalypse - I was late to the party for The Middleman. Both parties, actually, as both the comics and the TV series were finished by the time I got around to trying them. I did end up digging the comics, though, and I absolutely loved the TV show, and was sad that one season was all we got (it was probably way too quirky and proudly geeky to last long on any network, though, especially a teen angst delivery device factory like ABC Family, but still). And though the last episode ended on a decent note, it didn't tie up any plot points or feel like a true conclusion. It was just a last episode, not a finale. This short OGN by series creator Javier Grillo-Marxuach steps up to the plate and gives the series the proper ending it deserves, though, and is understandably pitch perfect. It wasn't too long before my brain started filling in all the actors' voices and recurring sound effects. And also like any other episode of the series, the script is chock full of comic book, sci-fi, and video game references, and there are even handy annotations in the back in case you miss a few (for instance, there's a whole lotta Blake's 7 going on in this story... and pay special attention to the robes worn by the villain). And though the artwork of Armando Zanker is a bit of a departure from original Middleman artist Les McClaine, his loose style is a lot of fun and I look forward to seeing more of his work. 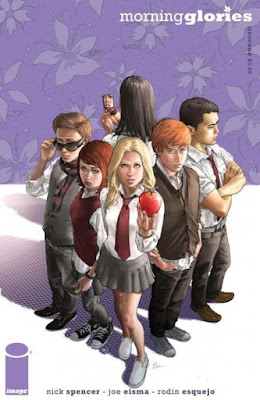 Morning Glories #1 - In short, mysterious and sinister shenanigans at a boarding school populated by kids who all have the same birthday and whose parents no longer seem to remember them after they're gone. The many, many hype pieces about this that were all over the comics inter-ma-net a while back touted this as "Lost meets Runaways," and yeah, I see that, but maybe my big problem here is that while I liked the latter half of that equation a whole lot, I could never work up much enthusiasm for the former. Not to say that this wasn't good, because it was decent, but I don't know that I feel compelled to read much further. Some of that is due to some pacing problems, I think, so maybe this will read better when it's collected. But on the whole, this feels less suited to being a comic book and might have been better off as one of those angsty CW shows that teenage girls (and my wife) all dig so much.
at September 03, 2010
Labels: Captain Marvel, comics, DC, Image, Readin, The Middleman