It's really important that she remembers where she parked the plane. 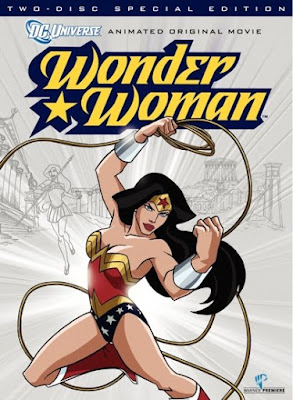 Finally got around to watching the Wonder Woman animated movie the other night. I remember reading a lot of complaints about it when it first came out, and apparently it has been one of the lower sellers in the line ever since it debuted, leading to the decision to pretty much only focus on Batman or Superman-related releases. I don't really understand any of that, though, because I thought it was really good, ranking right up there near the two Justice League movies (New Frontier and Crisis on Two Earths), and a hell of a lot better than Green Lantern, Superman: Doomsday, and Superman/Batman: Public Enemies, all of which bored the hell out of me. Still haven't seen the two Batman ones yet, Gotham Knight or Under the Red Hood, so I don't know how those stack up.

My very favorite part of Wonder Woman? They make no attempt whatsoever to explain the invisible jet. It just shows up out of nowhere when it's time to fly Diana and Steve Trevor back to the U.S. from Themyscira. Now, they could have tried to come up with some magical and/or divine explanation - lord knows they have in the comics before - but honestly, why bother? It's a premise that's just as well-known and accepted as her magic lasso or her bracelets, so rather than bog everything down with the hows and whys of it, the writers just take the plane as given and roll with it. It's goofy, sure - not as goofy as the flying car that punch a guy, but still pretty goofy - but trying to explain or even justify it will just call attention to it and make everything worse. Magic invisible plane - that's all you need to know.

Not that that's the only thing I enjoyed - decent animation, great voice casting (if we can't get Nathan Fillion as Hal Jordan, Steve Trevor has to be the next best thing), and a story that makes use of the PG-13 rating and doesn't shy away from the Amazons' status as powerful, capable warriors. And bonus points for a quick explanation as to why Diana's outfit is all stars & stripes. If you haven't seen it and like Wonder Woman even just a little bit, check it out.
at September 06, 2010
Labels: comics, DC, movies, Wonder Woman