Doctor Who and the Curmudgeonly British Comic Book Writer

Over on his Whitechapel forum, Warren Ellis threw down the gauntlet to the community for what he termed the "Ultimate Nerd Remake/Remodel," a design for the 13th and final incarnation of The Doctor. The thread produces a mix of interesting designs and additional posts from Ellis threatening to defenestrate people (or, as he calls it, just another Tuesday morning), but two so far stand out head and shoulders above the rest. First, and the one that's getting the most attention around the inter-ma-nets, is this design from Ben Templesmith: 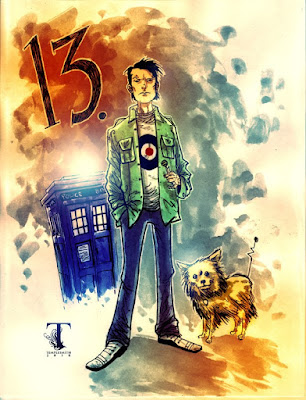 (and yes, the Pomeranian is supposed to be the new K9)

and then this, my favorite, from Pia Guerra: 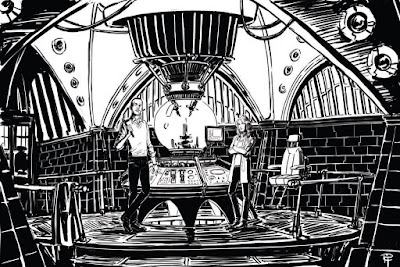 So much to love here. I dig the TARDIS as H.G. Wells-ish London Underground station, I like that the Doctor pretty much looks like he's just some guy, but most of all, I appreciate that Guerra said that his companion on the right there is Sally Sparrow.
at September 01, 2010
Labels: Art, Ben Templesmith, comics, Doctor Who, internet, Pia Guerra, TV
Newer Post Older Post Home