This may get SPOILERY. So, you know, read on with caution. 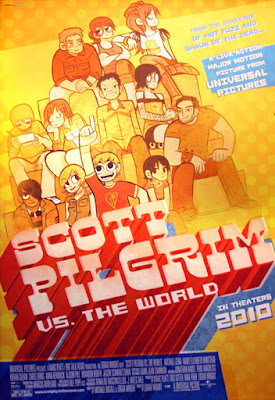 I just don't get the hate or the teeny box office numbers at all, because I thought Scott Pilgrim vs. The World was an awesome movie, folks, and the fact that razzafrazzin Vampires Suck, of all things, took in as much in one week as SPvTW did in two proves that America is, as we like to say in our house, effed in the a.

Well, yeah, there are a lot of reasons right now that America is effed in the a, pretty much all of them more important than a couple of end-of-summer movies, but this is a silly little comics & pop culture blog, so we won't concern ourselves with all of that right now, and instead focus on movies.

Anyway... as great as the initial trailers looked, I approached the movie with trepidation. For one things, a lot of terrible movies have awesome trailers (yes, Where the Wild Things Are, I'm talking about you unspeakably abominable Dave Eggers script), so you pretty much can't trust those first looks at all. But also, and more importantly, I'm a huge fan of Bryan Lee O'Malley's series, and the lightning fast re-read of books 1 through 5 I did in anticipation of both book 6 and the movie confirmed that all the more (oh my good god damn do those hold up). And in that sort of situation, you always go into a movie adaptation afraid of what they might change, or more to the point, what they might screw up.

Edgar Wright did well by O'Malley, though. Very, very well, in fact. Obviously the story had to be compressed and altered to fit a two hour run time, not to mention ended since O'Malley hadn't finished the final book by the time the script was done and filming was underway. But any condensing, trimming, or outright changing Wright did worked, both within the framework of the movie and when compared to the source material. We lose a few great moments, sure - oh, man, how awesome would the Knives/Ramona fight have been if filmed in the actual Toronto Reference Library? - and some changes are quite drastic (notably the fight with the Katayanagi twins) but I don't think the movie suffers for it. In fact, I think a few of the changes may even be improvements. I missed the Katayanagis' robots, but the Final Fantasy-styled summoning battle was awesome, and as much as I enjoyed Book 6, I think the final battle with Gideon worked a little bit better in the movie (even if it did give Ramona less to do).

But then again, I thought all the fights were awesome. Seriously, this is the best fight movie I've seen in forever. If you like seeing people kicked and punched in creative ways, you need to see this.

And the casting, yeah, that was just about perfect, too. Ellen Wong as Knives and Kieran Culkin as Wallace pretty much stole the show, but even the minor characters came off so, so well. Julie Powers was always kinda one-note bitchy in the books, but Aubrey Plaza really breathed some extra life into her (the bits where her anger kept killing the electricity and her profanity being modem noise sure helped), and for as little as Scott's sister Stacy had to do overall, Anna Kendrick made her memorable just the same. And though I seem to be in the minority, I mostly enjoyed Michael Cera as Scott. Yeah, he got a little wishy-washy and George Michael Bluth-ish here and there, but I liked how that counterpointed (is that a word? it is now.) his fight scenes. It worked.

And Allison Pill was Kim Pine. Maybe the wig they saddled her with was a little Orphan Annie-ish, but man, she sold that part and I am now deeply in swoon. I just wish she had had more screen time. But, as I said before, I'm all about the Kim Pine, so bias clearly affects my opnion.

Oh yeah, the soundtrack was great, too. So much so I had to run out and buy it the next day. Who do we have to pay to get everyone back together for more Sex Bob-Omb records? Seriously, Threshold is my current favorite song. Just cannot get it out of my head. Fuzzy guitars and mumbled lyrics FTW.

Long story short (way too late), Scott Pilgrim vs. The World was a big damn fun movie, and I think a lot of people will finally discover it when it hits DVD and then they'll kick themselves for not checking it out in the theater, exactly the way I did with Speed Racer. If you haven't seen it yet and still want to, I'd act fast folks. When even something like Vampires Suck can crush it in the box office, I think it's safe to say your window of opportunity is limited.
at August 23, 2010
Labels: Kim Pine, movies, Scott Pilgrim