The Comic Geek Speak podcast forums do sporadic fan art challenges, and in response to the online debate about the recent Wonder Woman costume change, they threw it out to the artistic listeners/posters to create their own Wonder Woman redesign, but with the caveat that it wasn't just a random costume change, it had to match up with the sort of reasoning J. Michael Straczynski and Jim Lee stated they had applied to the storyline and design respectively. Lots of great designs in the thread, you should really check them out if you're a fan, but this one by an artist named Ethan Wright was far and away my favorite. 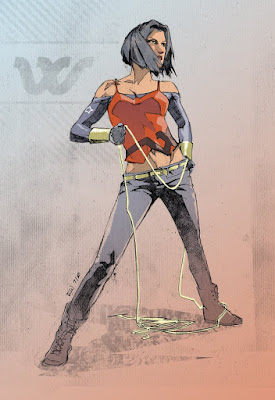 I love that it looks like, you know, clothes, but is still recognizably Wonder Woman. She can kick Cheetah's ass and then go see a band. Maybe even at the same time. The haircut is a nice touch, too.

You can check out more of Ethan's work - carefully, mind you, as there are a lot of tasteful but still NSFW images - at his website or his deviantART page.

(Bonus points to them for including 2010: The Year We Make Contact on the list. No, it isn't as visionary, thinky, or even as good as Kubrick's 2001: A Space Odyssey, but a damn
fine film all the same, and one that holds up surprisingly well considering the ahead-of-now tech and behind-the-curve Cold War setting it presents. And the fact that we have yet to, you know, make contact. But, there's still four months to make that deadline, so fingers crossed.)

And hey, io9 put together a similar list. A lot of crossover, as you'd expect, but there are a few interesting differences that make it worth checking out.

And if, like me, you enjoy movies and ranking things, you probably already know about Flickchart. If you don't, well, you should fix that. Basically, it presents you with two movie titles, and you pick which one you like better, Thunderdome-style. Process repeats ad infinitum and over time you get a fairly accurate - and occasionally surprising - list of your favorite movies. It's fun and insanely addicting, so don't blame me if you sign up and then never interact with your loved ones again. You've been warned.


Are you a geek with kids, or maybe you just act like one? They've got Batman: The Brave and the Bold Happy Meal toys over at McDonald's right now. They just came off of Marvel Heroes, too, and site says that Clone Wars is up next, so let's watch those cholesterol numbers, okay? Remember that they'll sell 'em to you separately if you ask.


Siskoid has been posting cards from his Unauthorized Doctor Who Collectible Card Game for a while, but the latest offerings, depicting the TARDIS crew from the Doctor Who RPG campaign he's been running, are particularly awesome, I think, thanks to the casting of the characters done by the players themselves (I'm not convinced John Rhys-Davies isn't already a Time Lord. And Susan as foxy librarian? Homina.).
at August 25, 2010
Labels: Batman, comics, Doctor Who, internet, links, movies, toys, Wonder Woman