Quick reactions to recent read, though not always recently published, comics. Yes, I changed the name of this feature. Again. Anyway, there may be SPOILERS afoot, so, you know, watch out. 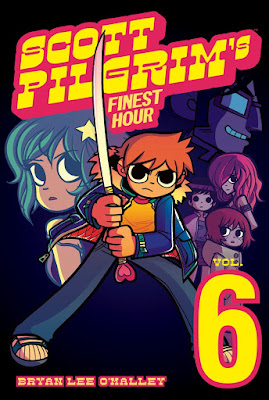 Scott Pilgrim's Finest Hour - I don't envy the task Bryan Lee O'Malley had set before him. It's hard enough to write a satisfactory ending for a single work. Harder still to write one for a multi-volume saga. And then one with a large, vocal, dedicated fanbase, too? Me, I'd have left town and no one would've ever heard from me again. O'Malley rose to the challenge, though, and pretty damn successfully at that. Did it hit every single story beat I thought it would, or even hoped it would? No, because it wasn't titled Let's Talk About Kim Pine Instead. Did the story give everyone the proper denouement they deserved? Pretty much. Were long-standing questions finally answered? Yup. Did it come to the conclusion that it needed to? Definitely. I'll admit to getting a little lost in the climactic battle, if only because I'm not as well-versed in manga tropes as a lot of folks, but that aside, this was a fantastic read, and a satisfying, appropriate conclusion to the series. I think it's time to revise my Awesome Things Canada Gave the World list.

X-Men #1 - It is a truth universally acknowledged that the world needs another ongoing X-Men series like the shopping plazas around here need another Sleepy's location*. That being said, I picked this up on a whim because I enjoyed all the previous X-Men Vs. Dracula stories, and this gets off to a good start, too. Maybe not as good as Dracula shooting weaponized projectile vampires at England from his base on the moon (God bless you, Paul Cornell), but writer Victor Gischler does aim the story in some interesting directions (vampirism spread by vamp bio-weapon suicide bombers), and it's good enough that I'll check out the trade paperback. So there's that. It does lose points, though, for being a big event thing, though, which will drive up the price of that eventual trade, which is annoying. I've been trying to follow Matt Fraction's Uncanny X-Men run in trades, but Marvel seems to think everything past the 3rd book needs to be a $30-35 paperback. Nope, sorry, try again, Marvel. I'm interested, but I'll wait until I can get 'em a good deal cheaper, thanks.

Casper and the Spectrals #1 - I'll admit to being worried when first seeing this, because the updated looks for Casper, Wendy, and Hot Stuff, I was afraid they'd gotten a Poochie makeover, but this was actually pretty good. Todd Dezago's story updates everyone a little bit, sure but they're still recognizably the Harvey characters we all know and (whether we'll admit it or not) love, and the message of friendship remains strong as ever. Though it's not as treacly as the old comics, and certainly less so than the millions upon millions of weepy Casper cartoons Famous Studios produced (though I'd take a marathon of those over a single Baby Huey or Herman and Katnip short any day). So yeah, this is nostalgia chow, but a young kid today would probably enjoy this, too.

Rambo 3.5 - Jim Rugg (Street Angel, Afrodisiac, The PLAIN Janes) shows us what happens when George W. Bush brings in Rambo to go back to Afghanistan after 9/11 to clean out the people he sort of put into power when he drove out the Soviets in Rambo 3. Antics ensue. You know from that description whether you need this or not. I fell heavily on the side of Do Need.

* Seriously, who is buying so many damn mattresses that there need to be as many Sleepy'ses as there are Game Stops? There might even be more, and there are a whole lot of Game Stops around here.
at August 04, 2010
Labels: Casper, comics, Harvey Comics, Jim Rugg, movies, Rambo, Readin, Scott Pilgrim, X-Men