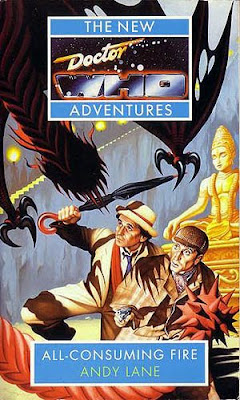 The Plot: (Quoted from the back cover, because someone got paid to write it and I figure why invent the wheel?) England, 1887. The secret library of St John the Beheaded has been robbed. The thief has taken forbidden books which tell of mythical beasts and gateways to other worlds. Only one team can be trusted to solve the crime: Sherlock Holmes and Doctor Watson.

As their investigation leads them to the dark underside of Victorian London, Holmes and Watson soon realize that someone else is following the same trail. Someone who has the power to kill with a glance. And they sense a strange, inhuman shape observing them from the shadows. Then they meet the mysterious traveller known only as the Doctor -- the last person alive to read the stolen books.

While Bernice waits in nineteenth-century India, Ace is trapped on a bizarre alien world. And the Doctor finds himself unwillingly united with England’s greatest consulting detective.

The Thoughts: The Doctor teaming up with Sherlock Holmes to fight Lovecraft monsters. It sounds like fan fiction, I know, but it's actually pretty awesome. I think a lot of that is due to the fact that most of the book is written like an actual Holmes story: Holmes and Watson are really the main characters here, with the Doctor and associates becoming eccentric supporting characters, and the bulk of the story is, as is typical, written as Watson's recollections in his diary. Those few events that Watson isn't privy to, or just would not be able to adequately explain, are similarly diarized (Is that a word? It is now.) by Benny. It's a clever trick by Andy Lane, because even though there's an obvious shift in voice and tone, the storytelling still feels the same.

Lane does give into a habit that you find in a lot of stories by non-canonical Holmes authors (i.e. not Arthur Conan Doyle), which is peppering the story with as many Holmesian hallmarks as he possibly can. Mycroft pops by, as does Moriarty. Perpetual skirt chaser Watson inevitably falls for Benny (made awkward by the fact that she's traveling as a man). The Giant Rat of Sumatra (the infamous story Holmes claimed the world was unready to hear) is name-checked, as are non-Doyle creations such as Holmes' oldest brother Sherringford and father Siger, who may very well be the first "fanon" characters ever created (by Holmes scholar William S. Baring-Gould). I'm willing to forgive Lane for this, though. For one thing, he clearly did his homework (in fact, Lane is now writing a series of novels based on the early life of Holmes), and for another, it's not like Who spin-off media don't do the same thing all the time. Hell, the first and third Doctors both get quick cameos here, and you better believe that that other famous Doctor Who / Sherlock Holmes mash-up, The Talons of Weng-Chiang, gets referenced a number of times.

Things do get a little weird once the action leaves Earth and gets all monstery on the world of Ry'leh, though. There are plenty of wonderful, strange concepts at play - Ry'leh's upper atmosphere, for instance, is a frozen shell, so our heroes literally have to climb into the sky - but such a rapid, bizarre change of venue really removes Holmes from his element too much and forces him into the backseat, which is jarring because as I said, he has been presented as the story's main character from the beginning, with the Doctor being his foil and irritant. And while the Doctor showing up, annoying the authority figure(s), and then taking over to save the day is standard operating procedure for a Who story, well, this isn't any normal authority figure. This is Sherlock Damn Holmes we're talking about here. If there's a figure who should be able to keep up with the Doctor (at least on some levels), it's him.

Overall: Fannish? Sure. Indulgent? Maybe. A fun read? Definitely. There's a lot to enjoy here for Doctor Who and Sherlock Holmes fans alike, and if you don't feel particularly well-versed in either character's "canon," it may inspire you to do a little investigating of your own. And if you're like me and haven't read many of the New Adventures line, and don't particularly care if you start at the beginning, this is as good a place to try it out as any.

Tangential-Though-Related Thought: Yeah, that's right, big a Who fan as I am, I never read the New Adventures series as the books were coming out. I was always sort of interested, I guess, but I was turned off by the fact that the series began with two different four-volume storylines (Timewyrm and Cat's Cradle), and worried it might be hard to jump on eight books into the series. Also, I was in college at the time and the books were being released at a pretty good clip, so I didn't know how I'd be able to keep up with all the other reading I had to do for classes.

Finally, from what I did know about the series from what I had read and what people told me... the turned the seventh Doctor into a real prick, didn't they? I know that he became a master manipulator as the TV series wore on, but just because he had to completely shatter Ace's faith in him (and maybe her entire belief system) in Curse of the Fenric doesn't mean he had to go and make a hobby of it in the books. That soured me on the concept early on, and I'll admit that it still bothers me as I read some of these now.