You'll never get that nerd smell out of a convention hall, no matter the size. 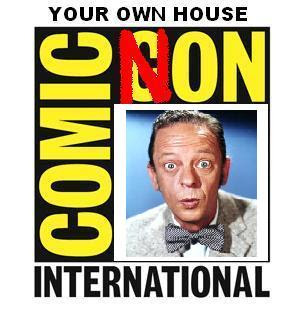 Even the world's least impressive pop culture gathering has to come to an end sometime. So whether you actually did throw a tiny living room convention for yourself or just headed off to the lake with friends for the weekend like I did, I hope you enjoyed this year's Comic-Non International, and sincerely thank you for playing along. Maybe it wasn't as exciting as the real thing, but there were bargains to be had (missed out on a cheap 2nd Doctor figure - damn eBay sniping! - but I did find that overpriced Uncanny X-Men: Manifest Destiny trade I've been wanting for just $5 at Fearless Readers Online). Also, fewer stabbings, so there's that.
at July 26, 2010
Labels: Comic-Non, Don Knotts