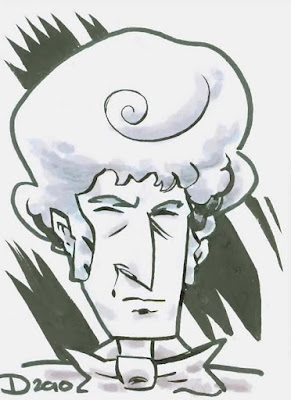 Sketch card rendering of the third incarnation of Doctor Who, as portrayed by the late Job Pertwee, drawn for me for Comic Geek Speak Super Show 2010 by Dave Dwonch, creator of Special Education, Gnome, and the webcomic Space-Time Condominium.

Dave told me that when he was drawing this for me from the reference pics of Pertwee that I provided, he "couldn't get over how much he looks like that guy from Whitesnake." As a result, I can't look at this Doctor now without thinking of David Coverdale, and then, inevitably, Tawny Kitaen doing splits on the roof of the TARDIS.

Hey, if I can't un-see it, then neither can you.
at July 20, 2010
Labels: Doctor Who, Pretty Sketchy
Newer Post Older Post Home