Lightning strikes for the last time in October.

Oh, man was I bummed to read this in the DC October solicitations: 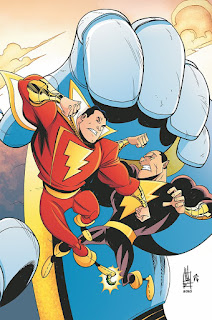 BILLY BATSON AND THE MAGIC OF SHAZAM #21
Written by ART BALTAZAR & FRANCO
Art and cover by MIKE NORTON
Black Adam has become the most powerful he’s ever been. It’ll take everything Captain Marvel has if he wants to defeat him. Will the combined might of the Wizard, Mary Marvel, Captain Marvel Junior and Captain Marvel be enough to overcome Black Adam’s power? Find out in the action-packed series conclusion!
FINAL ISSUE • On sale OCTOBER 20 • 32 pg, FC $2.99 US

I guess I shouldn't be too surprised, since most of the series I've loved over the past few years have met their ends far too soon, but it's still extremely disappointing. The book got off to a rocky start due to Mike Kunkel's scheduling issues and some, uh, let's say uneven artwork after Kunkel left, but it has been great storywise since the beginning, and got even better once Art Baltazar and Franco came on board as writers. Then when Mike Norton joined the book as the regular artist, it really started firing on all cylinders.

I think all but the Marvel Family diehards pretty much ignored the book, thinking that it must have been strictly for kids since it was a Johnny DC title, or that it "didn't count" because it wasn't in regular continuity. And that's too bad, because not only did folks miss out on a legitimately all ages-friendly super hero book, but also one that treated the characters with a lot more respect than they were getting over in the "real" DC Universe. Of course, DC has usually had a hard time making the Marvels work ever since they brought them back, but this series was one of the rare times when they really got it right. Hell, it may have been their best attempt at a Captain Marvel book, even better than The Power of Shazam was at its zenith.

But I get it. Comics is a business, sales maybe weren't where they needed to be, or maybe they wanted to get Johnny DC out of the super hero business altogether, what with Super Friends ending last week and the Batman: The Brave and the Bold tie-in book getting the axe, too. But whatever the reason, I'm still sad to see my current favorite monthly super hero book - the only one I do still follow monthly, in fact - come to an end. But thanks to Mike Kunkel, Art Baltazar, Franco, Mike Norton, and everyone else who worked on Billy Batson and the Magic of Shazam over the last few years. It was a fun ride while it lasted.
at July 21, 2010
Labels: Captain Marvel, comics, DC, I am apparently the harbinger of comic book death