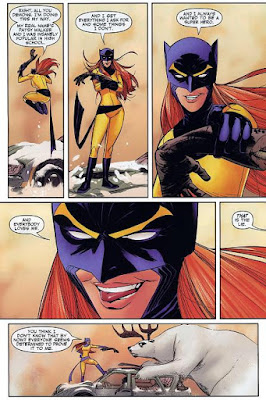 I suppose Patsy Walker has always been a little unusual, character-wise. Going from wholesome, teen model, Archie Comics imitator to superheroine who at various points has been an Avenger, a Defender, wife of a guy named The Son of Satan, dead, and then not dead will do that. But I never paid much attention to her in the past because, well, Marvel obviously didn't know what to do with her, so why invest the time?

Kathryn Immonen, though, she got it. First in a three-part serial in the brief Marvel Comics Presents revival, and then in a 5 issue mini-series, she got to the heart of Patsy, weaved all of those continuity threads into something that made sense, and then imbued her with so much charm, personality, and heart that you have no choice but to love her. It's "Gidget Goes Super," if you like.

I would have loved to see more of Immonen's take on Patsy trying to make do as Alaska's one-woman superteam, but it just wasn't in the cards. Luckily, she's been handled similarly well since, by the likes of Paul Tobin in Models, Inc., Roberto Aguirre-Sacasa in Marvel Divas (horrible title, fun series), and by Immonen again in the recent Heralds. Given how dour superhero comics have tended to be in the last several years, it's refreshing to read about a hero who faces her obstacles with a smile, a wink, and a smart, snarky put-down or two. Hell, not just refreshing, downright endearing.
at July 16, 2010
Labels: comics, Friday Favorites, Hellcat