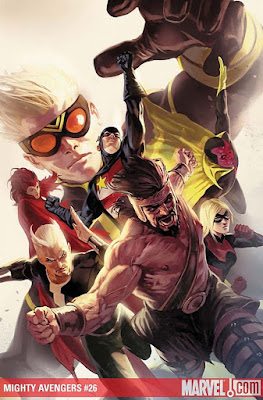 Dan Slott's Mighty Avengers (assorted issues, don't ask me to remember) - Got a whole mess of Avengers comics and related stuff from Phillyradiogeek a few weeks back, and this was pretty much the first stuff I read, because I've heard good things and I did enjoy the first issue when I got to read it a while back. And while I've never been the biggest Avengers fan in the world, oh my damn these were good. I always like the team best when it's an oddball assortment of characters, and this is a very grab bag kind of line-up, which is great. Most impressively, though, Slott made me care about, and even enjoy, Hank Pym. The guy's been the bitch of the 616 for pretty much his entire career, and Slott uses that history to good effect, reinventing him as a driven, if unhinged, genius out to prove the world is wrong about him, and he doesn't care who or what he has to take down to do it. It doesn't hurt that there's more than a little Doctor Who in this characterization of Hank, either. Scientist Supreme, indeed. I'm annoyed that this had to fall by the wayside for the franchise relaunch, but oh well, it's now that much easier to grab the rest of the run.

Terra TPB - I enjoyed the character in the first Power Girl trade a little while back, so I figured I'd give her earlier solo turn a try. Jimmy Palmiotti and Justin Gray's story doesn't really do anything you haven't seen before, but it's pleasant, and they certainly make the new Terra likable enough. But as to be expected, it's Amanda Conner's artwork that's the real showpiece here, once again elevating a decent story to a good one with her chops for storytelling, timing, and the best, most expressive faces in comics today.

The Pro - Followed up Terra with the latest edition of this other Amanda Conner-drawn book from several years back, though it's about as far removed storywise from Terra as you can get thanks to Garth Ennis. I've never been the biggest Ennis fan, but I liked what he did here, turning what could easily have been a one-note joke (hooker gets powers and joins the JLA) into some well-placed commentary on superhero comics and life in general. It's foul as all hell, but it's smart.

Sea Bear and Grizzly Shark - With a title like that, I was hoping for dumb fun, but no, this was just dumb. I couldn't even be bothered to finish it. I generally enjoy the work of both Ryan Ottley and Jason Howard, too, but this just failed to deliver for me on every level.
at July 19, 2010
Labels: Avengers, Better Late Than Never Reviews, comics, DC, Image, Marvel, Power Girl, Terra