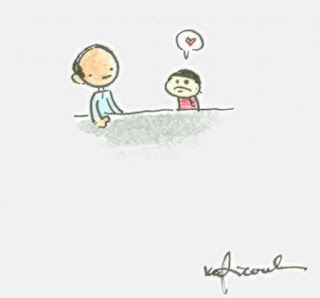 It's the stars of the greatest Star Wars-based buddy comedy never made, Lando Calrissian and Nien Nunb (seriously, George, where's their spin off?), as rendered in tiny watercolor form by Katie Cook at Comic Geek Speak Super Show 2010 (where I also should've picked up the awesome Godzilla Vs. Mothra mini-painting she had sitting on her table, too, which I've been kicking myself for passing up ever since!).

Katie is awesome and friendly, so give her your monies if you ever meet her at a con, and be sure to check out her adorable webcomic Gronk: A Monster's Story.
at June 27, 2010
Labels: Pretty Sketchy, Star Wars