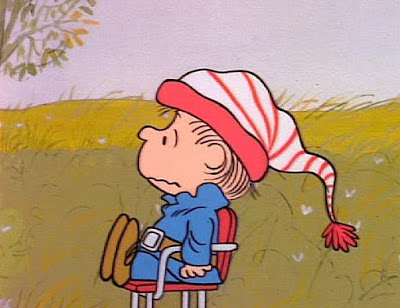 Even when you consider that little kids talking like grown-ups was always one of the hallmarks of Peanuts, it was still pretty ironic that the youngest regular cast member had some of the most adult problems of all. Rerun, as you may remember, was a frustrated artist (his kindergarten teacher wanted him to draw flowers; he wanted to be an underground cartoonist). And he was suspended for harassment when he wanted to run off to Paris with the little girl who sat next to him in class. And he also managed to get the one victory for Charlie Brown's baseball team overturned when it was revealed he bet on the game.

Of course, if you were to ask Rerun himself, he'd probably say his biggest problems were that his mom was a terrible bicycle driver, that he couldn't reach the basketball hoop, and, of course, that no one would buy him a dog.

But all that aside, Rerun led a pretty charmed life. He came up with some pretty creative solutions to his problems (my favorite: a dog on his mom's bicycle route kept taking his shoes, so he started bringing a bag full of shoes to throw at the dog), he somehow managed to bring out the nice side of Lucy (as nice as she can be, anyway), and he pretty much took over the strip most weeks in the last 5 years or so. But most of all, he proved to me that as shaky as Charles Schulz's linework may have gotten toward the end, his mind and sense of humor were sharp as ever.
at June 18, 2010
Labels: comics, Friday Favorites, newspaper strips, Peanuts