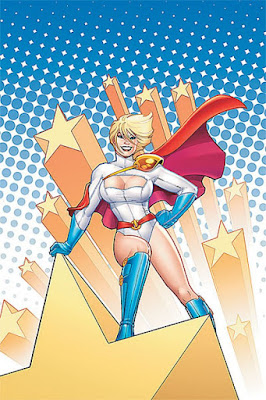 Quicker than quick (stronger than strong, ready to fight for right against wrong) reactions to recently read (though not always recently published) comic bookery. Still fighting through the to-read pile, and I've been on vacation besides, so these'll be super short.

Atomic Robo Vol. 2: Atomic Robo and the Dogs of War - While I liked that the first series jumped around in time to show the scope of Robo's life and adventures, having this one focus on a specific timeframe and set of characters grounded the story in a way that another string of episodic adventures wouldn't have. Plus, it's always fun to see Nazi robots get smashed.

Empowered Vol. 2 - Just as sexy, smart, and sweetly endearing as the first volume, with the added bonus of Emp having to go undercover as a hot librarian to help her team capture a fetish-based villain (hey, there's a reason I led off the adjective cavalcade with "sexy"). Yeah, maybe Empowered is a little bit smutty, but it's literate smut with a whole lot of heart.

Power Girl: A New Beginning - They should just rename this book The Amanda Connor Show. Jimmy Palmiotti and Justin Gray write good stories with Power Girl, injecting her with more personality and charm than pretty much anyone ever, but in the end, it's still pretty standard superhero fare. Connor's artwork amps it up to the next level, though - she can say in a single facial expression what some creators can't get across without pages of dialogue and exposition. Thanks to her, an otherwise good, if unspectacular, book is elevated to greatness.

Proof Book 1: Goatsucker - I know this has its fans, but honestly, to me it's just another Hellboy homage. Not that Atomic Robo, which I love, isn't, but at least Robo is funny. And about a robot. Proof's story takes itself a bit too seriously, and the scratchiness/muddiness of the art impedes the storytelling a bit too much. A good effort, but not my cuppa.

Aquaman: Time and Tide - An enjoyable retelling/retconning of Aquaman's origin (bits of it, anyway), but the out-of-sequence storytelling made for a disjointed read. Also, after reading the beginning of the Peter David Aquaman series made it seem like the story really began here, but this leaves me thinking it really, really begins in The Atlantis Chronicles. How far back does all this go? And finally, it could've used more Mera. Mera is awesome. But still, a fun read.
at June 02, 2010
Labels: Aquaman, Atomic Robo, Better Late Than Never Reviews, comics, Empowered, Power Girl