Quickie reviews/reactions to recently read (though not always recently published) comics. Maybe some SPOILERS. So yeah, you know. 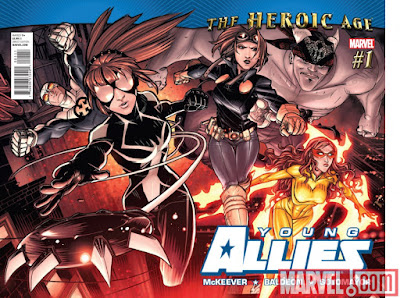 Young Allies #1 - With its mix of new and experienced young superheroes, this is sort of New Warriors Redux, but that's not a bad thing. Good cast (Firestar is always welcome, and it's nice to see Sean McKeever writing both Gravity and Nomad again), interesting villains (Ignored super-villain offspring band together as the Bastards of Evil? Genius.), and some terrific art from David Baldeon. Maybe doesn't get as big a start as it should, but it has potential, and I hope it finds enough of an audience to buy the time to reach that potential.

Legion of Super-Heroes #1 - I'm glad we have a Legion book again, I'm glad it picks up the threads of Geoff Johns' Superman & the LSH and Legion of Three Worlds stories (two Johns works I really like a lot... who knew?) so effortlessly, and I'm especially glad to see both the return of Paul Levitz as Legion scribe and the arrival of Yildiray Cinar on the art. But, if I'm being honest, this didn't wow me out of the gate, and I really wanted to be. Expected to be, even. Lots of good ideas being set into motion, though, so I'm hopeful it'll build to something exciting, but not the immediate WOW I was looking for, and that let me down a bit.

GI Joe #155 1/2 - Continuing the theme of The Returning Writer, Larry Hama picks up here from the end of the original Marvel G.I. Joe book. And it certainly feels like the Marvel G.I. Joe book, but I've found in recent years that that series didn't age as well as I would have hoped. But I was only ever a casual fan of the comics, anyway - with G.I. Joe, you either liked the comics better than the cartoon or vice versa, and I definitely preferred the cartoon - so I'm probably going into this with the wrong mindset in the first place.

Mystery Society #1 - Steve Niles' new mini-series about a team of paranormal adventurers led by couple that ooze sex appeal and charm, very much a modern-day Nick and Nora Charles but without Asta the dog. And while the whole idea of paranormal adventure team thing seems sadly commonplace in our post-X-Files, post-Hellboy world, this has a fun vibe that I think will set it apart nicely. I'm interested to see where it goes, anyway. Fantastic art by Fiona Staples, too; I wish that they had used her cover (seen below) as the regular version, and saved that scratchy Ashley Wood image for the variant.

Brave and the Bold #34 - I occasionally take issue with J. Michael Straczynski's comics work, but what I've read of his Brave and the Bold has been fun, and this was no exception, providing exactly the sort of bizarre team-up shenanigans I was hoping for when I saw that this issue featured the Legion of Super-Heroes and the Doom Patrol. The resolution came a bit quickly, almost as if he knew he had to write this story in order to get to the one he maybe really wanted to do - next issue's teaming of The Legion of Substitute Heroes and the Inferior Five - but on the whole very enjoyable, and proof positive that you can still play in the DC Silver Age sandbox without needless deconstruction, recontextualization, and out-of-nowhere "adult" themes.

Billy Batson and the Magic of Shazam #16 - Don't know what else I can say besides that this is still the most fun, and possibly best-looking, book DC is currently putting out, and that the way Art and Franco are handling Freddy Freeman as Black Adam's increasingly reluctant protege a whole lot better (and in a way that makes far more sense) than anyone handled the whole Black Mary thing over in the regular DC Universe a couple years ago. So there, I guess I had some new praise after all. Get on this one, folks.

Attack of the Monstrology - Ape Entertainment anthology based around the theme of B-movie monsters. Not always as clever as it wants to be, or as on-topic as it should be, but there are some fun moments (the real reason behind city destroying kaiju battle, an increasingly ridiculous moon mission failure told as a series of newsreel entries) that make it worth a quick read. 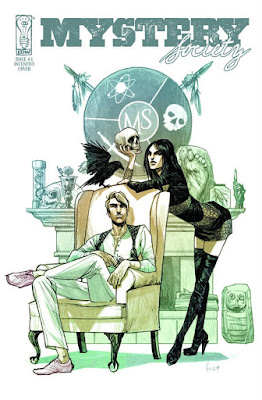