Don't be so quick to malign 90s Aquaman. For one thing, he might stab you. 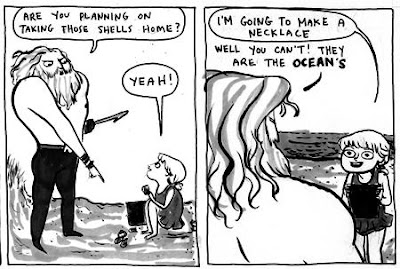 Kate Beaton's recent discovery of the harpoon-handed version of Aquaman struck me as funny - well, funnier, as the strip itself was hilarious - because it managed to coincide with my own re-discovery of Cranky, Pointy Arthur Curry, and we both came to the same conclusion: this Aquaman is pretty cool, much moreso than current reaction to that particular story direction would have you believe.

On the one hand, I get it. In the 90s rush to make nearly every character dark, edgy, and cool, Aquaman got slapped with just about every accoutrement in the Official Chromium Age Character Makeover Toolkit, as this graphic shows: 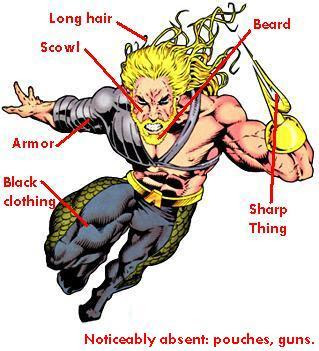 So on the surface, yeah, I can see where people get the idea that he's 90s in the 90siest way possible (note to non-comics people: that's generally considered a bad thing). And his story became reasonably darker, too: he's lost his kingdom, he loses his hand, he's broody, he's angry, etc. But here's the thing: Aquaman's history was pretty dark from about the 70s on. His kid is killed, his wife goes insane (and later dies), he loses his kingdom (several times, I think; he needs to keep better track of these things), and on top of all that, has to listen to all those "talks to fish" jokes made by every lame comedian from the 80s stand-up comedy boom.

That much crap luck? It's going to take its toll. Writer Peter David was smart to capitalize on that. But he still handles it with a light touch, light enough, in fact, that Aquaman's sanity is a question of legitimate concern for the cast in the early going. Not in a Mel Gibson in the original Lethal Weapon way (or even Mel in his drunk driving arrest way, either), but more of a "he's taking all of this just a little too well" way. It's subtle, and all the better for it; I generally enjoy Peter David, but subtle isn't always his thing, so it's nice to see here. And at least when he does give into his most Peter Davidy impulses, it fits the scene, and it works. Aqualad's awkward attempts to hit on Dolphin, for instance, are funny. And I'm convinced the man writes the best shark dialogue ever, so there's that.

Admittedly, I'm only 6 or 7 issues into the run, and things are just starting to build, and for all I know it eventually crashes and burns, but so far that doesn't seem to be the case. David has built a compelling narrative so far, one that takes Aquaman in (then-)new directions but still seems logical enough, even if it seems a bit extreme on first glance. And I like that DC's various other undersea characters are being slowly drawn into the story, setting up one of the sort of Dynamic Centerpiece Model Scipio over at The Absorbascon was always talking about. It's exciting, and it feels like it's going somewhere. I can't say that I get that same feeling from a lot of modern comics, sadly, so I think I may be passing up some of those for a while so I can track down more of this.

Now please bear in mind that I am in no way saying that I dislike "classic" Aquaman. I've had an affinity for the sea king for just about as long as I can remember, and I don't see that changing any time soon. I just think it's great that so many creators have been able to leave a distinctive mark of one kind or another on the character over the years, and that at the end of the day, all the different versions still ring true to me. So I think it's silly for any take to be maligned just because it's different than what we're used to. Hell, the version running in the Batman: The Brave and the Bold cartoon, despite looking familiar enough, might be the most different of them all, and also maybe the most popular. So don't hate on the harpoon. It may seem like an attempt at 90s "kewl," but it works surprisingly well.

Besides, this is the version of the character they opted to use on Justice League Unlimited, you'll remember, and seeing as that show is pretty much my Platonic ideal of the DC Universe, well, if it's good enough for them... 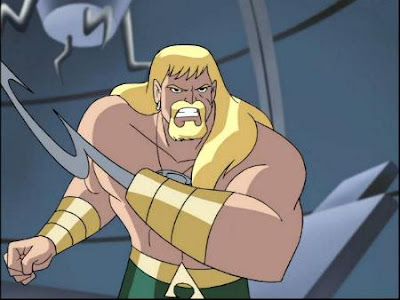