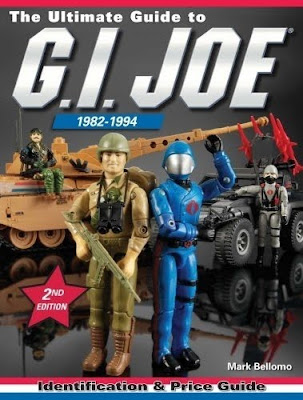 So the cover calls this book a price guide, and there's certainly collector's market pricing info contained within, but that's probably not why you're going to want this. You will want it because it contains pictures and descriptions (often quite detailed) of every G.I. Joe: A Real American Hero action figure, vehicle, playset, and accessory that Hasbro produced in that toyline's run.* If you're anything like me, you'll spend a whole lot of time scouring this book for the Joes you had, the ones you always wanted, and a whole lot that you probably didn't even know existed in the first place. It's part Sears Wish Book, nostalgia chow, and semiotic analysis of the 80s through one of the decade's most popular toy franchises all in one.

Seriously, even without looking at the years that each line was being produced, you can tell exactly when the Cold War ended. Down goes the Berlin Wall, and in come the neon color schemes and bizarre subsets devoted to drug enforcement, dinosaurs, and space monsters.

* Well, not the Sgt. Savage stuff, which seems an odd omission because the Street Fighter 2 sub-line is included, but I'm sure Mark Bellomo had his reasons.
at May 26, 2010
Labels: books, G.I. Joe, nostalgia chow, toys
Newer Post Older Post Home