Sherlock Holmes and the Unrelenting Blandness

You're probably familiar with the movie studio called The Asylum if you've ever wandered the local video store, Redbox, or Netflix queue. They're the ones who make movies that seem vaguely like whatever's popular in theaters at the moment. Transmorphers, Paranormal Entity, that sort of thing. Well, recently - inevitably, really - they made a Sherlock Holmes movie. And since Holmes is a public domain character, they didn't even have to change the name. 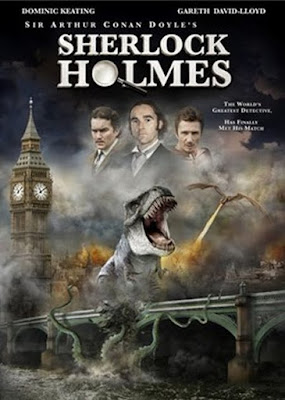 And yes, that is a dinosaur. Sherlock Holmes fights a dinosaur. Nontraditional, sure, but still, sounds awesome, right? Well, don't get your hopes up. No matter how low you set your expectations, you're going to be disappointed, because everything is just that much worse that you even think it's going to be.

Our villain is allegedly the legendary Spring Heeled Jack, but I only know this because that's how he's listed in the closing credits; the movie itself never gets around to calling him this, or anything else. Watson is played by Torchwood's Gareth David-Lloyd, who's actually not that bad, but most of what he's given to do here is basically be Ianto in a mustache. And what of Holmes himself? He's bland, soft-voiced, and seemingly as disinterested in playing the part as you're likely to be watching him play it. Very little presence here. How little? He's playing Sherlock Holmes, and he doesn't even get his name above the title. Admittedly the villain and the sidekick are both sci-fi show alumni, but still.

But here's the thing that bugged me most. It's Sherlock Holmes, a giant squid, a dinosaur, all manner of clockwork automatons that'll get the steampunk fans all hot and bothered, and a climax that involves a fight between a hot air balloon and a dragon... and it's boring, which to me is unforgivable. Be good, be bad, anything... just keep it interesting. Own the ridiculousness. I knew a lot of people who loved Full Moon Entertainment movies growing up, and not one of them would ever come out and say that any of their product was technically good, but they sure thought it was entertaining enough to go back to again and again. People sought out those movies. The only people seeking out this movie are the folks intending to pick out the Guy Ritchie film who somehow manage to miss the T-rex in the center of the cover.

If an incongruous dinosaur can't manage to make your film more entertaining, you've got bigger problems than I can help you with, Sonny Jim, because even in inept hands, that's usually a recipe for awesome.
at April 06, 2010
Labels: movies, ranting, Sherlock Holmes