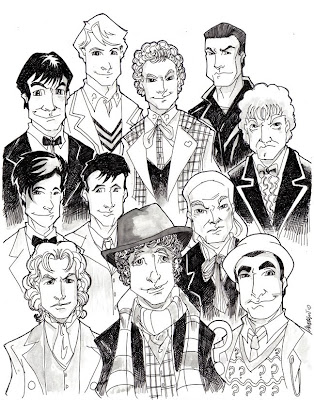 I've posted plenty of Andrew Charipar artwork throughout the history of the Pretty Sketchy feature, because frankly I find it really hard not to get art from him when I have the chance. I dig his style, he's a hell of a nice guy, and he tends to enjoy a challenge. So when I asked him if he could draw me all 11 Doctors in a Justice League #1 sort of set-up, he eagerly took up the task despite not being very familiar with Doctor Who at all. I happily supplied him with reference, though, and when he handed me this at CGS Super Show, well, I was giddy, I'm not gonna lie, and got giddier still when he handed me the prelim sketches he did to get the looks right, too.

And considering he did two other pieces for me at the show (well, one for me, one for the kiddo), yeah, you'll be seeing more of his work up here before too long.
at April 11, 2010
Labels: Doctor Who, Pretty Sketchy
Newer Post Older Post Home