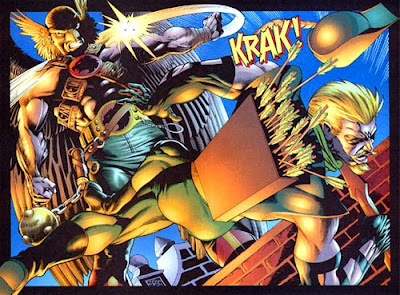 And once again, quick reactions to recently read (though not necessarily recently published) comics. Potential SPOILERS ahead. So, you know, there's that.

Batman: Ego and Other Tails - A collection of short Batman stories written and/or drawn by Darwyn Cooke, which are decent if hit and miss, and his complete Catwoman original graphic novel, Selina's Big Score, which is exactly the sort of thing you should read if you like a good heist story and proof that Cooke is the perfect person to adapt Donald Westlake novels (seriously, go read Parker: The Hunter if you haven't already). If you already own the original version of Selina's Big Score, you don't really need this unless you're a Cooke or Batman completist, but if you don't, go get this now, you won't be sorry.

Uncanny X-Men: Sisterhood - Maybe not Matt Fraction's most riveting X-Men storyline out of what I've read so far, but points for handling the returns of Madelyne Pryor and Psylocke in a direction I wasn't expecting, so it certainly held my interest. Could've used a little background on Maddy's minions, though; I recognized Spiral and Lady Deathstrike, but had no clue at all who the others were. Were two of them Mastermind's daughters or something? But the last issue in this collection, a time travel adventure of Beast's super-scientist X-Club, was a lot of fun, and exactly the sort of thing that'll keep me reading on with Fraction's run. Plus, it had the advantage of not being drawn by Greg Land, so I wasn't constantly distracted guessing which actresses or gentleman's special interest magazine models he "cast" as various characters. So that was nice.

Green Lantern: Sinestro Corps War Vol. 1 - Tried this once before and hated it, but since so many people love it, and since I've come around a bit to Geoff Johns thanks to his Legion stories, I gave it another shot, and I'm glad I did. I still think Johns tends to prefer the destination to the journey, using the story as a way to get from one Big Happening to another rather than letting the events guide the story, but as Giant Space War stories go, yeah, this was actually okay the second time around, in large part because it's not really the big ol' Hal Jordan lovefest I thought it was the first time. Actually kinda looking forward to part 2 now.

Hawkman: Endless Flight - While on on a Johns kick, I was also in the mood for some Hawkman, and the library had this to offer me along with Sinestro Corps. And while this book of the first several issues of the aughts Hawkman series is a little more pedestrian than you'd maybe expect from co-writers Johns (as his star was rising) and James Robinson (when people still talked about his books positively), it's still a decent enough read, and they boil down the king of the continuity-@#!$ed characters to his core concept: Flying Reincarnated Hits-Things-With-A-Mace Guy. And some days, that's exactly what you want. Plus, Hawkman totally pimp slaps Green Arrow at one point, and that's always awesome to see.

Time Lincoln #1 - Great high concept on this - Lincoln snatched from the moment before his death to become a steampunkish time traveling hero - but the execution was lacking. Somehow the folks at Antarctic Press managed to create a book about Lincoln that doesn't have all that much Lincoln in it. Huh. It leads in to an upcoming mini-series, I guess, but there was enough awesome here to convince me to stick around for it. Too bad, too, because I really like comics about time traveling hero presidents.

Aquaman: Sword of Atlantis #s 40 & 41 - Yeah, I'm really late to the party here, but I picked 'em up out of a cheap bin this weekend, and they were really good. I can kind of see where it was a hard sell - both Aquaman and barbarian comics are hard sells in the industry these days, no matter how many people profess to love both, not to mention that it's not the "real" Aquaman - but the story gets off to a great start, and I'm definitely going to keep picking these up and see where it goes from here. If only I had done so when it was still a going concern.
at April 26, 2010
Labels: Aquaman, Batman, Better Late Than Never Reviews, Darwyn Cooke, Green Lantern, Hawkman, Matt Fraction, X-Men