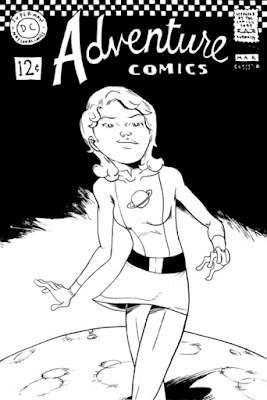 (Click to make it Titan-sized.)
I picked up so many sketches at Super Show, I'll have fresh fodder for Pretty Sketchy posts for months. I don't know if I could pick one favorite, but this is definitely among the three or four vying for that top spot: the Legion of Super-Heroes' resident telepath Saturn Girl, rendered by Fred Chao. I'm such a fan of his book Johnny Hiro that I would've been happy to walk away with a napkin scribbling from Fred; getting a full-on sketch from him was an amazing bonus. That he even included a logo and DC go-go checks... I was speechless. And wouldn't you just know it, he's a hell of a nice guy, too. Go buy a copy of Johnny Hiro if you haven't already!
at March 31, 2010
Labels: comics, Fred Chao, Legion, Pretty Sketchy