If you've ever been to Reading, PA, you know that it's an odd choice for a weekend getaway. If you've never been to Reading, well, don't go unless you have a reason. It's the town that skeevy built, and nearly unnavigable, even if you have a GPS and maybe a Sherpa. That being said, the Comic Geek Speak Super Show is a hell of a good reason to endure all that.

Born out of the Comic Geek Speak podcast and the community that sprouted up around the CGS forums, it's roughly the size of one of those hotel ballroom cons you've probably been to in the past, but I doubt you've ever been to a con where the creator-to-attendee ratio was this good. There were a few dealers there, sure, and they had some great deals, too (quarter books up the wazoo), but most of the tables were devoted to creators from all across the industry: Walter and Louise Simonson, Gabriel Hardman, Mike Norton, David Petersen, Katie Cook, Chris Eliopoulos, Danielle Corsetto, Kat Rocha & Josh Finney, Dave Wachter, the entire PKD Media crew... I know I'm still forgetting people. Mix in the usual assortment of 501st Legion members, cosplayers, a balloonisimo, other podcasts... don't let the size of the show or the location fool you, folks, this was a great show, and one that you should definitely make an effort to attend in the future.

And here's the haul (minus a pint glass and a Dalek t-shirt, anyway): 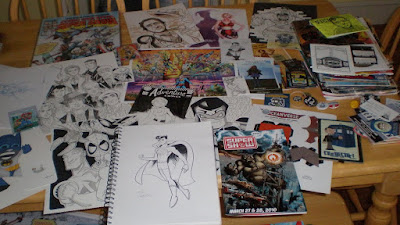 And no, I didn't drag my family to Pennsylvania just for comic book stuff. We also hit the Crayola Factory in Easton (not actually the factory, but the "experience" with lots of hands-on activities and a fun gift shop) and Hershey's Chocolate World in, well, Hershey (also not the actual factory, but you see the entire process in a very Willy Wonka-esque presentation and there's yet another gift shop, of course, and yeah, we stocked up). And while in Hershey, we had one of the better dining experiences of my life (The Chocolate Avenue Grill) and one of the more horribly awkward ones (The Hershey Pantry, where the waitstaff kept dropping stuff and the manager kept yelling at them, and they'd yell back... directly in front of us). But Super Show was definitely the catalyst that set the entire trip into motion, and well worth the effort, sketchy as Reading may be.