Warning: it's gonna get pretty nerdy up in here, even compared to the normal Official Trusty Plinko Stick Nerdiness Standards.

I really enjoy the Doctor Who action figures that have come out in the past few years, and they're among the few toys I still collect (on the rare occasion availability, my budget, and/or present-receiving holidays make that possible, anyway). But as awesome as they look on my nerd cave shelves, I would've loved to have had these to play with as a kid. When I first got into Doctor Who, there weren't even over-priced imported (and, let's be honest, poorly made*) Dapol figures yet (those would come a couple years later, right around the time I would start buying toys purely mostly for display).

So I did what any dorky kid with too much time and imagination would do: I made my own. Or rather repurposed my own, at any rate. Post-Return of the Jedi, the Star Wars toy line dried up, you'll remember, and interest waned. Sure, I still loved the movies, but I hardly ever used the toys anymore, preferring then-still-active concerns like G.I. Joe, Transformers, and Masters of the Universe. But all those Star Wars figures were still had a hell of a lot of play value left in them, of course, so they formed the backbone of my new DIY Doctor Who universe.

Here were the major players.

So this was a later incarnation of the Doctor. Colin Baker was still in the role when I started, and I knew that eventually there'd be a 7th Doctor down the line sooner or later, so I decided Han here would be the 9th... far enough down the line that I wouldn't worry about a new actor not matching my version, but not so far along as to be near the end of his life. Many years later, I found it funny that the actual 9th Doctor wore a short, dark coat.

(And no, he didn't use a gun... just couldn't find a pic that lacked it. In fact, assume that just about any accessories you see in the pictures went unused.)

Luke Skywalker (Bespin fatigues) as a prior Doctor (eventually 5) 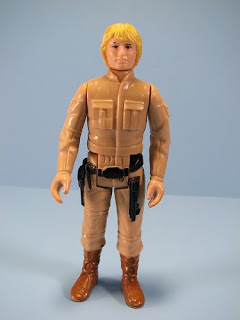 Obviously there had to be at least one previous Doctor for the inevitable multiple Doctor stories. And while I think I initially decided Luke would be playing the part of #8, it soon dawned on me that if I stuck him in the white robe that came with the disguised Indiana Jones figure from the Raiders of the Lost Ark Map Room playset, I had a good enough 5th Doctor. And seeing as Peter Davison was my favorite of the TV Doctors at the time, I was pretty pleased with myself. 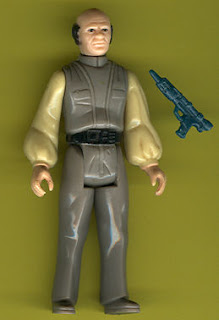 The epitome of "no spoken lines and yet they still get a figure" original trilogy characters, Lobot was still one of my favorite Star Wars figures. Maybe it was the headphones or the puffy sleeves, I dunno. Anyway, he was a friend and sometime traveling companion of the Doctor, and he had such an awesome name I felt no need to change it. 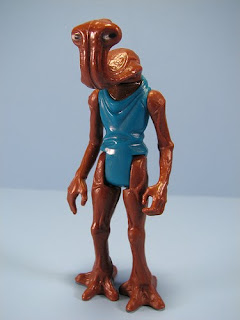 Another awesome cameo-only Star Wars character who nabbed himself a larger role as a companion. And remember, these were the days before any of these guys had actual names and complex backstories, so Hammerhead was his name and he liked it that way.

Obi-Wan Kenobi as the Master 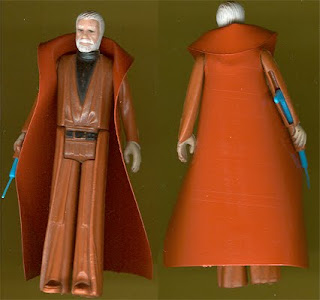 Ben, sans cape and long-lost lightsaber, was an older incarnation of the Master. Partially because his figure always looked kinda sinister, but mostly because the lightsaber hilt built into his hand was a decent representation of the Master's tissue compression eliminator gun thing. Eventually he'd regenerate into... 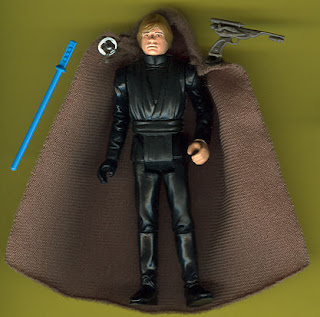 Back in black, and now younger than the Doctor to boot. 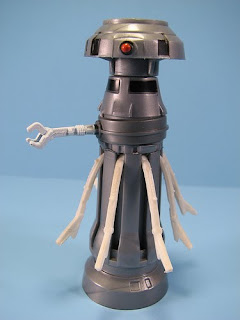 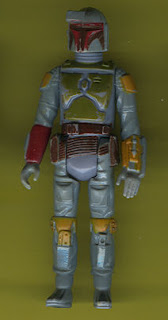 Again, if it ain't broke, don't fix it. Of course, this Fett was yet another renegade Time Lord who went around dressed in battle armor and killin' people for money. And I gave him some sort of connection to Rassilon and/or Omega that granted him some sort of legit control of Gallifrey once he decided he wanted it, which I thought was an interesting plot development, anyway. 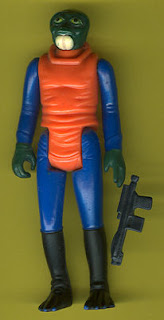 Because Walrus Man was awesome, that's why, even if his original figure made it look like he was wearing a life preserver.

Of course, not every person in my little Doctor Who universe was originally a Star Wars figure. Indiana Jones showed up a few times, as did several Adventure People (Astro Knight in particular), the occasional G.I. Joe or two, and even some of the 3 3/4 sized Mego figures like Buck Rogers or the Dukes of Hazzard (though not as themselves). Most notable among the Mego members of the cast, though, were these guys: 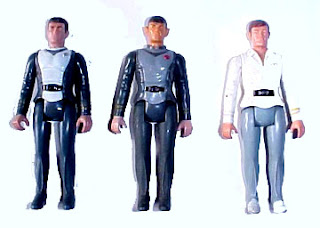 Yes, not unlike thousands of fanfic writers, I had the Doctor interact with the crew of the Enterprise. At one point, they had been sent to try and persuade Gallifrey to join the Federation. Looking back, I question how smart it was to send Captain Punchy McSkirtchaser to appeal to as austere a people as the Time Lords, but hey, it made sense at the time.

*Not that that has stopped me from picking up the Dapol toys of the 7th Doctor, a Dalek, a Cyberman, and the TARDIS over the years. Used to have a K9, too, but he broke.
at March 01, 2010
Labels: Doctor Who, my misspent youth, toys