So Marvel announced that they're going to follow in the footsteps of Astonishing X-Men by creating an entire "Astonishing" line of books that will be (theoretically) new-reader friendly while still playing in the sandbox of the established Marvel Universe (as opposed to theoretically new-reader friendly books set in a different though superficially familiar universe like the Ultimate line or Marvel Adventures). This is the image of the X-Men that they use to promote this line: 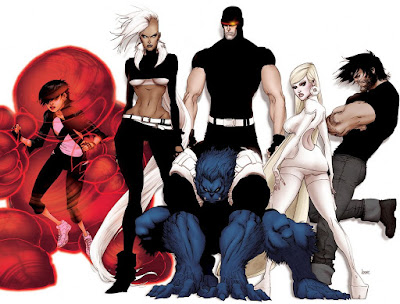 Now I'm not slamming Kaare Andrews' artistic chops here, as generally I enjoy his work. And I really like his designs for Beast (yay, no more Kitten Beast!) and Armor (though I wonder how she sees out from under that hair). But Storm? Come on, guys, even if you ignore the shitstorm of commentary that's going to come from such an impractical and sleazy design - and it'll happen, believe me, you can count on the inter-ma-net for that - it seems very out of character for Storm, who may have worn skimpy outfits in the past, true, but never anything so outright slutty. Plus, she's royalty now... you'd think an actual queen would wear something a little more dignified and a lot less Jersey Shore.
at February 15, 2010
Labels: Marvel, ranting, X-Men