A few words on that Not-Douglas-Adams Douglas Adams book. 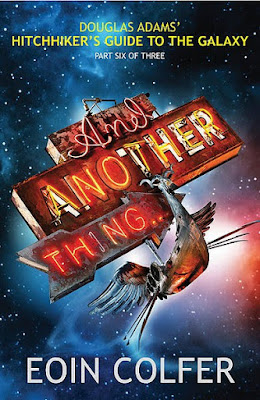 Admittedly I had pretty low expectations going into this. Douglas Adams is one of my favorite authors ever, and good as Eoin Colfer's reputation is (I've never read any of Artemis Fowl books, or anything else he may have written), he's not going to be Douglas Adams. I'm also not a big fan of "tribute band fiction," even if there have been, for instance, some good Sherlock Holmes stories written by people other than Arthur Conan Doyle. Generally speaking, though, I don't think literature needs legacies carried on by anyone other than the original authors themselves.

(And yes, as comic book fan, I know that Marvel & DC's entire business model is based on people writing other people's creations, so need to point out the irony, thanks.)

But again, Colfer's reputation is pretty good. And Adams' wife and daughter signed off on this. And I actually kind of hated Adams' own final Hitchhiker novel, Mostly Harmless, so I figured that at least this couldn't be much worse. I got off my high horse and gave this a shot, and you know, it wasn't bad.

The biggest success here is that he mostly avoided the tribute band route. Colfer certainly told an Adams-inspired story set firmly within the man's established universe, but he didn't attempt to ape Adams' voice slavishly. He does spend a little too much time throwing out callbacks to the originals - you'll read more references to Pan Galactic Gargle Blasters and the Bugblatter Beast of Traal in this book than in the rest of the series combined - attempting to prove to us that yes, he, too, is a big fan and that we shouldn't worry. He's not outright rehashing Adams' unique turns of phrase, and for that we can be thankful, but at the same time, he does manage to make everyone sound right, or at least right enough that the transition to a new storyteller isn't as jarring as it could be. The intermittent Guide entries lack a bit of the usual sparkle, but considering those were the most Douglas Adamsy parts of the original, that's to be expected, but at least they're still mostly funny.

Colfer quickly establishes his own voice and pace, and once he's done with the business of figuring a way out of the ending to Mostly Harmless, he manages to tell a pretty decent story here, reminiscent of both the H2G2 and Dirk Gently books, in fact, and though I thought it ended a bit anticlimactically, it's a largely satisfying (or at least pleasantly diverting) read. He plays well in Douglas Adams' sandbox, and treats the toys with respect. In the end, that's probably the most we could hope for.

The book's opening calls this an Appendix to the story of the Hitchhiker's Guide to the Galaxy, and that's the best way to look at it: interesting, even entertaining, but optional.

It was a damn sight better than Mostly Harmless, though. I'll give Eoin Colfer that.
at February 09, 2010
Labels: books, Douglas Adams, Eoin Colfer