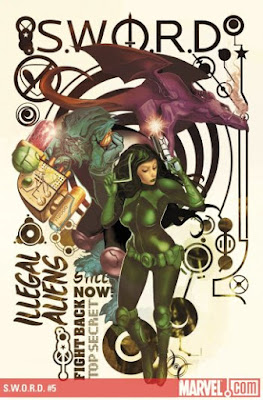 Brief-ish reactions to recently read (though maybe not recently published) comics. Let's get this started before any of us here relapse.

Marvel Divas - Terrible name, arguably worse cover, and yet among the most enjoyable Marvel reads of the past few years. The "Sex & the City with Super Powers" comparison was probably inevitable, but it's nowhere near that vapid and shallow. Roberto Aguirre-Sacasa just tells a smart story about four friends supporting each other in their times of need, and they just happen to also be superheroes. And Tonci Zonjic's artwork on this is amazing, very reminiscent of Alex Toth. I'll be keeping an eye out for his work. I love that Marvel continues to experiment with the types of stories they tell with their mid-card and curtain-raiser characters.

(And If you had told me a few years ago that Marvel would put out three different books starring Patsy Walker within the span of a year, and that I'd like them all so much she'd become one of my favorite characters, I'd have never believed you. Comics are awesome like that. Also, more Firestar is never a bad thing.)

The Middleman: The Collected Series Indispensability - The free preview of the first issue offered through the various iPod comics apps and a subsequent viewing of the first few episodes of the TV series made this a must-buy for me, and it's a terrific book. Javier Grillo-Marxuach creates a fun world in which every comic book and movie trope you can imagine co-exists - mad scientists, talking apes, shady covert agencies, long-lost parents, dead sidekicks, martial arts masters, and gangs of luchadores - and it's up to The Middleman and his reluctant recruit Wendy to stop them. Brilliant fun, drawn in a clean, loose style by Les McLaine for most of the run. If there's any drawback, it's that the TV series was too faithful. I've only seen four episodes, and two of those are taken pretty much verbatim from stories collected here, so there was an awful lot of familiarity. Don't let that hold you back, though, as this is a fun read.

Billy Batson and the Magic of Shazam #13 - After a shaky start with the talented but perpetually late Mike Kunkel, Art Balthazar and Franco have made this my favorite DC book; the only one I still follow monthly, in fact. The art, however, has been... I'll be diplomatic and say inconsistent. With #13, though, Mike Norton joins as the regular artist, and it's the shot in the arm this book has needed. His style is looser, maybe even more expressionist, than a lot of his previous work, but it's still powerful and superhero-y as all hell, worlds beyond what has come before, and maybe even better than Jeff Smith's work on the Monster Society of Evil mini that spawned this series in the first place. At long last, the art matches the story. It finally looks like the all ages, classic superhero book that Balthazar and Franco have been writing all this time, and I finally have the Captain Marvel book I've been wanting for years. If you like things that are good, you'd do well to jump on this ASAP.

S.W.O.R.D. #5 - Kieron Gillen, Steve Sanders, and company did their best, but five issues of S.W.O.R.D. is all we get. Sad, too, because over those five books we got a clever, fun story of betrayal, invasion (several invasions, in fact, one hilariously misinformed), subterfuge, political intrigue, and a cast of characters from, quite literally, all across the Marvel universe. Any book that can easily bring together the likes of Lockheed, Beta Ray Bill, and Death's Head? That's a book I want to read. If only more of you out there felt the same. But hey, if we're going to be getting more MI13 appearances from Paul Cornell, maybe Gillen will get to do more with S.W.O.R.D. sometime, too, which would be appreciated, even if it's just an appearance by Beast and Abigail Brand, the new best couple in comics. Seriously, though, folks, if you haven't been reading this, at least make the effort to check out the trade.
at March 13, 2010
Labels: Better Late Than Never Reviews, Captain Marvel, comics, DC, Firestar, Hellcat, SWORD, The Middleman, X-Men