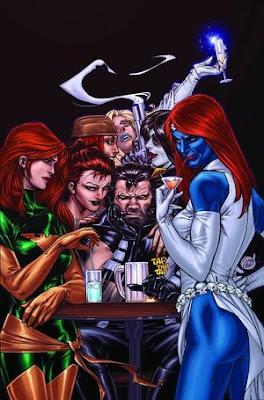 Even briefer than normal reactions to recently read - if not recently published - comic bookery.

Wolverine: Weapon X #10 - Wolverine comes to grips with getting an honest to god girlfriend, reporter Melita Garner, who I hope becomes a fixture because she's awesome. A quiet, brilliant, funny, talky issue by Jason Aaron, with fantastically stylized art by C.P. Smith. Get this now.

Jonah Hex #50 - Dropped this a long time back when it basically became Western Rape Comics, but Darwyn Cooke brought me back for this one, and he didn't disappoint. Justin Gray and Jimmy Palmiotti's story of Hex and Tallulah Black is just heartbreaking. Not fun comics, per se, but damn good.

Agents of Atlas: Turf Wars TPB - Mildly disappointed by the first arc of the no longer (but hopefully again) ongoing, but this was a return to the heights of the original mini-series, particularly as the Jade Claw story amps up at the end. The changing art teams were distracting, though; all great artists, true, but the jumps were still a bit much.

Fantastic Four #575 - Always nice to see Mole Man monsters and the High Evolutionary, as well as the return of Dale Eaglesham, but not enough of an upswing from the last two dire issues to keep me on this monthly. We'll always have Dark Reign: Fantastic Four, though, Jonathan Hickman.

Joe the Barbarian #1 - Sean Murphy's artwork on this was gorgeous, but at first glance, Grant Morrison's story is a little too much I Kill Giants meets The Stuff of Legend for me to see what all the hype is about yet. But I am intrigued, and this is definitely something I'll be coming back to in trade, though.

Batman: The Brave and the Bold #13 - Possibly my favorite issue so far, and one of the few to feel like it could be a real episode. Seeing the likes of Captain Marvel, Green Arrow, Aquaman, and Plastic Man putting their own spin on being Batman was fun, and seeing Angel and the Ape was a hoot. Anyone know where I could maybe buy one of those Captain Marvel as Batman pages?

Billy Batson and the Magic of Shazam! #12 - This take on Mr. Mind and the mirror version of Captain Marvel, Niatpac Levram, was fun, but Bryon Vaughn's artwork just wasn't doing it for me at all. Looking forward to seeing Mike Norton debut on this next month.

Spider-Man and the Secret Wars #2 -While I'm glad to see Tobin isn't just recapping the original Secret Wars slavishly, I still found myself wishing that this story (the suburb of Denver brought to Battleworld under siege, defended by Spider-Man, Ben Grimm, and Dr. Doom of all people) tied into the original a little more. It was good, don't get me wrong, but it felt a bit too tangential.
at February 10, 2010
Labels: Batman, Captain Marvel, comics, Wolverine