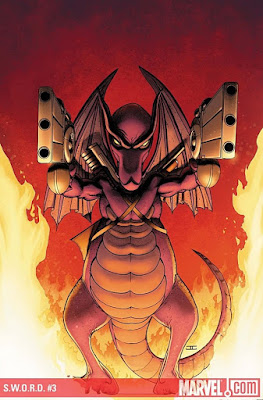 And once again, quick reactions to recently read comics:

The Incredible Hercules: Against the World - I read this several months back and while I thought it was decent, I didn't see why everyone online was making such a big deal. But I gave it another shot this past week and absolutely loved everything about it - the characterization, the strong basis in both Greek mythology and Marvel history (I pretty much have to love a story that can call back to both Hercules' labors and Marvel's Godzilla series), and that like the best Marvel books lately, it takes place within the framework of major events but doesn't tie in directly. Maybe I had to approach it on my own terms, free from the expectations of others, I don't know, but I'm hooked now.

The Unwritten Vol 1: Tommy Taylor and the Bogus Identity - Picked up the first issue back when it came out because it was only a buck and thought it was alright, but like most of your better Vertigo books, it's a much better reading experience in chunks, where you can see the plot really come together and watch as it becomes a quirky "What if Harry Potter were kinda real?" story to a deeper tale about destiny, faith, conspiracy, and the geography of literature. And then you get that fifth issue with Rudyard Kipling and Mark Twain... I was getting chills. Now, in the interest of full disclosure, I was an English major in college, so I'm likely predisposed to enjoy teh Book Pr0n, but still this is the good stuff. Buy it to ensure its longevity so I can keep reading it please and thank you.

The Losers: Close Quarters - It's been a while since I read the first three volumes, so it took me a little while to remember who everyone was and what had happened before, but the plot kicked into gear pretty quickly, so it was easy enough to get swept along anyway and just be reminded of everything along the way. More great heist/black ops hijinks as the action ramps up en route to the fifth and final volume, with a few great action sequences that have me convinced the movie version is going to be awesome if they can find a way to translate this stuff directly to the screen.

Starman #81 - I haven't read a word of Blackest Night, and I've yet to enjoy any of James Robinson's recent work as much as his 90s output, but the curiosity and anticipation of a new issue of Starman won out over any hesitation I felt. And you know, this was actually pretty good. No Jack Knight to be found, but Robinson was always good about spreading the screen time among the various citizens of Opal City the first time around, so this just felt like another one of those interstitial spotlight issues. Besides, we get to see the Shade and Hope O'Dare again - together, no less, which is something I've been wanting a glimpse of since Hope announced she was going to ask Shade out on a date back in the series finale - and we do get a Starman, even if it is one of those Black Lantern things the kids are into these days. This could've been awful, and maybe even should have been, but I was pretty happy, all things considered. Nice to see you can go home again for 22 pages or so.

S.W.O.R.D. #s 2 & 3 - Ending with issue 5? But... but... Agent Brand being endearingly badass! Beast being all clever and urbane! Lockheed showing it's the size of the fight in the dragon, not the dragon in the fight! Henry Gyrich being all shifty-like! Aliens demanding Earth wimmins! And god damn Death's Head... Death's Head, people! Come on! What the hell is wrong with you guys? This book is awesome.
at January 28, 2010
Labels: Better Late Than Never Reviews, comics, DC, Hercules, Marvel, Starman, SWORD, Vertigo