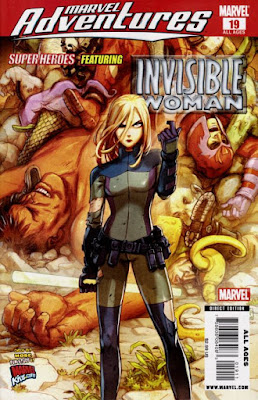 Final Crisis: Legion of Three Worlds HC - Okay, Geoff Johns is finally making me a believer in his work, at least insofar as his Legion of Super-Heroes stuff is concerned. This was exactly the giant, widescreen, pandimensional teenage superheroes from the future in outerspace epic that was promised, and one that I think comics history will rank on a par with Great Darkness Saga, Earthwar, and An Eye for An Eye. And for once, a DC attempt to establish new a new continuity (or at least kinda sorta re-establish and old one) doesn't result in the hamfisted erasure of what was in place before. The Reboot and Threeboot Legions (ugh... the things you find yourself saying when you love comics) both still have a place in the DC multiverse, thankfully, with some even looking to have roles within the new-old-new LSH. So all that and George Perez artwork, too? Yeah, this is Fun Superhero Comics, even though it doesn't have a damn thing to do with Final Crisis (hell, maybe because of that), no matter what the title says.

Battle for the Cowl: Oracle: The Cure #s 1-3 - This, on the other hand, seemed to spin directly out of Final Crisis, and that one Teen Titans where Wonder Dog mauled Wendy and Marvin (and there's another typing oddity that makes sense only to comic folk), and didn't have a damn thing to do with Battle for the Cowl, or anything other than Barbara Gordon's boobage and fondness for threatening to hit people in the neck with sticks. Not that that matters, really, as this was utter garbage, and even though I ended up getting these for free, I still feel ripped off somehow. Even if you're Babs' biggest fan, or boobs' biggest fan for that matter, skip the living hell out of this.

Ms. Marvel #47 - This was a cute story about Carol Danvers and Peter Parker taking time out from New Avengering to go on a date. It's all shop talk and awkward pauses until, of course, antics happen to break up the evening. I've had a fondness for superhero date stories, going back to that Captain America / Diamondback date issue that Mark Gruenwald wrote back in the early 90s, and this one was just as fun, I thought, so good job finding entertainment in the talky mundane, Brian Reed. Art could've been more consistent (pencils were handled variously by Mike McKone, Rob Disalvo, and Derec Donovan), but on the whole, this was fun.

Marvel Adventures Spider-Man Vol. 14: Thwip! - I always enjoyed the one-and-done nature of Marvel Adventures Spider-Man, but rarely felt the need to catch up with it unless I enjoyed the creative team. Paul Tobin's semi-relaunch, however, gives me both a writer I enjoy and an ongoing narrative I feel compelled to follow now. Everyone wins, though mostly Marvel. The high school setting makes this reminiscent of Ultimate Spidey, but without the kewl character reinventions, the needless, gory deaths, and Mark Bagley drawing all teenage girls to look like mid-40s truck stop prostitutes. He does make some additions to the regular cast, though, ranging from the traditional in Gwen Stacy and her dad to the unusual choices of a teen Emma Frost and Sophia "Chat" Sanduval, a mutant who can speak to animals and Peter's new love interest. Throw in some guest shots by Captain America and Cloak & Dagger and some fantastic covers from Skottie Young, and you've got the sort of Spider-Man book that will entertain newbies and traditionalists alike.

Marvel Adventures Super Heroes #s 17 - 19 - More Marvel Adventures goodness from Paul Tobin, as he sets up a new version of the Avengers featuring all the usual suspects (Cap, Iron Man, Thor, Vision, Black Widow) and some unusual choices (Sue Storm, Nova). I kind of wondered at first why we needed a different Marvel Adventures version of the Avengers so soon after the last one, but I should learn to just shut up and trust in the Tobin, since he's doing some really interesting things here by dropping Sue into the mix. Why would she so cavalierly leave the FF? Is Captain America actually flirting with her? What sort of information is Reed looking for here (besides maybe the obvious), and why would he hire Black Widow to get it? There's a lot going on here below the surface, and it's pretty compelling reading as a result.