Allons-y: some rambly, long after-the-fact thoughts about The Waters of Mars and The End of Time 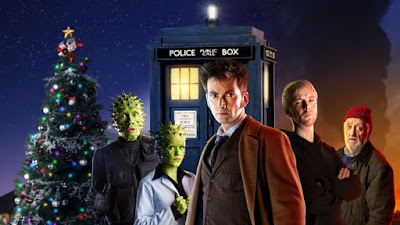 The Waters of Mars and The End of Time may have been perfectly ordinary, fair-to-middlin' Doctor Who plots, but together they made for a terrific story, and exactly the sort of send-off I was hoping David Tennant's Doctor would get. And while I know there are plenty of folks out there who'd disagree with that, I can't help but think they're stuck in a "forest for the trees" thing. The rather ordinary nature of the plots was kind of the point, I think, in that for someone who lives through as many Big Spectacle Moments as the Doctor, the smaller, more pedestrian events (at least by this show's standards) can still change life forever.

Look at The Waters of Mars. For most of the story's run time, it's basically Standard Who Plot #3, the "Base Under Siege" story, albeit one with the unusual wrinkle where the Doctor can't actually do anything to fix the situation because the horrible fate of the Mars station crew is a fixed moment in time, and one on which pretty much the entire future of human endeavor hinges. But when the Doctor finally decides he's bigger than Time itself, The Waters of Mars sidesteps into Greek tragedy territory, and when all his work is basically undone by both the event's participants and, it can be argued, Fate itself, he is ultimately punished for his hubris, and forced to admit that not even he can undo the machinations of a determined universe. His song will still end, no matter what.

And The End of Time? Basically a mash-up of standard Big New Who Plotlines: rich guy uses alien tech for nefarious reasons, Big Enemy comes back from beyond the void and nearly tears Earth apart, lots of things shot at the Doctor, and, of course, the return of the Master. And it all comes together in a fun, if oddly paced two part story. And in the end, exciting and Star Wars-y as it gets, it doesn't actually matter. It's the quiet moments that we all remember most from the story, and it's a quiet moment that does in the Doctor. This regeneration ends not with a bang, but a whimper. An actual whimper, at that, as he sobs his final words, "I don't want to go."

These were all about the performances, anyway, especially The End of Time. I've been a fan of Bernard Cribbin's Wilf since his first quick appearance in Voyage of the Damned, and was hoping he'd get an adventure of his own one day as his role grew in season 4. He did not disappoint here, being every bit the loving caretaker, consoling friend, and unwavering soldier, and his grandfather-to-grandfather conversations with the Doctor pretty much stole the show. Even more impressive considering how good John Simm was as the Master, the best version of the character since Roger Delgado originated the role (Simm may even surpass Delgado, heresy though that may be to some). Simm's relationship with Tennant's Doctor actually reminds me a lot of Delgado's relationship with Jon Pertwee's Doctor in that for the first time since Delgado/Pertwee we actually and convincingly see that these two people were once friends, and maybe each wish at least a bit that they could be again.

Good as everyone else may have been, though, it was still Tennant's show, and he delivered the pitch-perfect farewell, particularly in The End of Time's climax as he expresses his frustration at being done in not by some major threat, but his simple inability to avoid helping someone in need. It's simple, brilliant, and maybe a bit metatextual, since we were probably all expecting him to go down in a giant blaze of glory, not as the result of an odd lock. But from a mundane death (again, by this show's standards, anyway), came a unique opportunity in that the Doctor got the chance to tie up loose ends for once, making sure that everyone he has come to love is going to be okay. Metatextual again, as it's as much a farewell tour for Tennant himself, and Russell T. Davies, as the Doctor. Indulgent? Perhaps, but a well-done sequence, so it's easy to forgive.

We most certainly did not get all of the Big Questions answered like we may have thought we deserved. We know more about the Time War now, and what the Doctor did to end it, but Davies frustratingly, even tantalizingly, replaces those with even bigger questions that are only fleetingly addressed (Rassilon?!? What the what?). But whether he left those as threads to be explored later by Steven Moffat and Matt Smith or to remain forever unanswered, they're ultimately beside the point. The end of the 10th Doctor wasn't about the Big and the Loud, it was about the Small and Quiet.

Why else would the most memorable, defining moment of the Doctor's new beginning as Matt Smith be an exclamation? Thanks for the memories, David and RTD. You'll both be missed, but I'm anxiously awaiting what Steven and Matt have in store for us. Geronimo, indeed.
at January 17, 2010
Labels: Doctor Who, TV