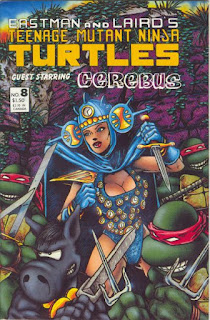 Way, way back in the halcyon days of 1986, I would occasionally convince my parents to let me mail order my comic books from Moonshadow Comics in Portland, which was certainly the first direct market comic book store I had ever encountered, maybe even the first one in all of Maine (the arrival of Bangor's first comic shop, Wizard of Comics, was still a few years off at this point). I eventually stopped using their service, though, when they made what I considered at the time to be an egregious error, and swapped out some crucial books for stuff I didn't order. Sure, I got my issues of Captain America, Marvel Age, and some of the other books I considered essential, but the rest were odd. I should have been reading the first issue of the Howard the Duck movie adaptation, but instead I had this dumb book a lady with clocks on her boobs, a grey, Peter Porker-looking barbarian, and four ninja turtles.

I was appalled. I had never heard of this book, it didn't have superheroes, and worst of all, it was printed in black and white! I mean, honestly. I wanted to return the books and complain, but my parents couldn't be bothered. Funny books were funny books, they said. Defeated, I thumbed through the weird, new comics, tossed them in the stack with the rest of my collection, and promptly forgot about all of them.

About a year and half later, I'm watching TV after school one day, and these guys come on the screen: 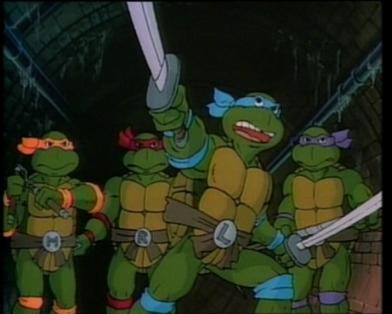 And from that first episode, I was hooked. They sure looked different than the ones in that almost-forgotten comic, though. I dug it out to be sure, and while these guys were kid-friendlier than the originals, everything matched up, so I actually read the comic this time, and though it was a very different experience than what I was seeing on TV, it was still pretty enjoyable, even without any color.

A few months after that, Wizard of Comics opened, and they had a whole table of Turtles books out which I descended upon like the cartoon versions on a pizza. Stuff like in-story references to other comics and creator credits in the anthology book Turtle Soup made me curious about other independent books, and now that we had a comic book store in town, I could actually find some of them.

So while purists may have resented the TMNT cartoon - and subsequent merchandising explosion - and thought it was a sell-out move by Eastman and Laird, it sent me off to discover both the original comic book and the world of independent comics as a whole. Come to think of it, it sent me back to those discoveries. Moonshadow Comics tried to get me started earlier, but I wasn't ready yet.

For a while, I was mad that they sent me the wrong books. But in the time since, I've been mad that I never got the chance to thank them for that.
at December 06, 2009
Labels: comics, Getting Hooked, TMNT, TV