Winter here is messy. It was less so in Maine. I'm no fan of snow, but it's a lot easier to clean up the yard after snow than the wet slop we get here.

But I digress. As always, these are short reactions to recently read (though not always recently published) comics. And away we go. 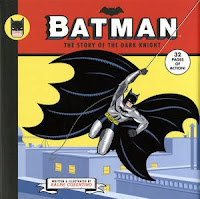 Batman: The Story of the Dark Knight by Ralph Cosentino - Not actually comics, but a picture book outlining the "Who He Is and How He Came to Be" of Batman for the kids. Cosentino's illustrations are gorgeous, very Golden Agey by way of someone like, say, Seth (some pages are recreations of panels from Batman's comic book origin), and he gets points for not sidestepping the whole "MY PARENTS ARE DEAD!!!" thing, handling it in a straightforward, but tasteful manner. Nothing new or earth-shattering going on here, but if you enjoy Batman and aren't opposed to things that are fun, you'll dig it and will want to buy a copy for the kid(s) in your life, and probably one for yourself, too.

Batman/Doc Savage Special - Lots of the online folk seemed to have a problem with this, mostly because the story doesn't have a whole lot of "there" there ("Batman's innocent." "Why, Doc?" "Just 'cuz."), but it got me excited for this whole First Wave thing that it's kicking off, so I'm willing to overlook what should otherwise be a not-so-shortcoming. Well, that and the "Batman with guns" thing. I don't care if he did use guns for 30 seconds back in 1938, I never enjoy the idea of a pistol-packin' Batman. But anyway, I mostly enjoyed Brian Azzarello's characterization, the Phil Noto artwork was, as always, a thing of beauty to behold, and the preview sketches and pitch material in the back was pretty interesting, especially the idea that this is some sort of combo retro-modern Earth with cell phones and airships (there are always airships in these things, aren't there?). I think they should've called this something like "First Wave Prelude Starring Batman and Doc Savage," maybe that would've lessened people's expectations a bit, but I want to see what comes next, so mission accomplished, DC.

Black Widow and the Marvel Girls #1 - Like Jeff Parker and Fred Van Lente before him, Paul Tobin has made the Marvel Adventures line into his own little fiefdom of good storytelling, comic books true to the spirit of the characters without being weighed down by whatever major events are going over in the so-called "real" books. And while the premise of this story may raise your eyebrows at first (Black Widow teams up with the Enchantress? In flashback? Wha huh?), the result is entertaining and surprising. Any time writers can work both espionage and Asgardian magic into the same story seamlessly, you know they're on to something. I suspect that if you enjoyed Tobin's earlier Doctor Doom and the Masters of Evil mini-series (and you did enjoy that, right?), you'll find a lot to like here, too.

Fantastic Four #573 - I kind of wished Jonathan Hickman had just come right out and titled this "The One Where I Tie Up the Loose Ends from Millar's Run," because that's all this was. And I didn't read Millar's run, so I had no particular attachment to the story or the characters. And even then I thought it was wrapped up too quickly and in slapdash fashion. Uninspired fill-in art, too. And nothing like the cover ever occurs in the book, which is too bad, because that story looks fun. In short, this was about as bad as the the past few issues have been good. I'm hoping he bounces back next issue.
at December 10, 2009
Labels: Batman, Better Late Than Never Reviews, comics, Doc Savage, Fantastic Four
Newer Post Older Post Home