Hip to be Dimensionally Transcendental? 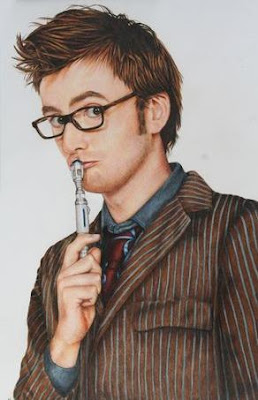 In a short piece in the November issue of Wired, Scott Brown talks about something I've noticed with increasing frequency over the past few years: Americans are actually starting to like Doctor Who.

Now, of course, this is all due to the current series, which unlike the original, has money and decent effects and lead actors that people would like to smooch. I get that, and even as a fan of the original, I appreciate those things, too.

Doesn't stop the whole thing from seeming sort of amazing to me, though. I can remember a time when admitting to watching Doctor Who, or even just knowing enough about the show to understand the basic premise, was schoolyard suicide. Not that that ever stopped me, mind you, because I suffered from a childhood malady known as "Not Knowing When to Keep My Big Trap Shut," so I had yet another heaping helping of nerddom thrust upon me at an age when it seems like I couldn't go a day without someone reminding me of how near the bottom of the social ladder I sat.

(Could've been worse, though. I could have been the kid who wore the Tom Baker floppy hat and long scarf to school that one time. That kid didn't just sit at the bottom of the ladder, he built a cottage and lived there year round.)

But at long last, this is changing. I think part of it is the public acceptance of geeky entertainment, of course. The success of comic book and sci-fi movies and TV series both overt (The Dark Knight, Star Trek) and more subtle (Lost) have created a lot of crossover appeal for this sort of thing. Even just ten years ago, I never would have imagined seeing Aquaman or TMNT shirts in the Men's section of Target or people getting excited over a revival of Battlestar Galactica, of all things.

I have to think the growth of cable television has a lot to do with this success, too. Back in the day, Doctor Who... all British TV, for that matter... was almost entirely the domain of PBS. And in the eyes of a lot of folks, there are exactly two ages when PBS is cool: when you're young enough for Sesame Street or old enough for woodworking shows. Being a kid and admitting you watch shows on PBS, even if it's Monty Python or Fawlty Towers or even some show where you actually saw boobs because PBS didn't seem to care about that sort of thing (the miniseries of Armistad Maupin's Tales of the City was important to me for all the wrong reasons)? Again, schoolyard suicide. But now, it's on cable, along with just about every other important British series of the past few decades. Removed from the fear that it might be somehow educational or stodgy, people are really starting to embrace this stuff.

And good for them. Too bad I can't let out a good old-fashioned "I told you so," though, as I'm pretty sure it'd still result in someone giving me a wedgie.
at November 22, 2009
Labels: Doctor Who, TV
Newer Post Older Post Home