You've got the Touch (almost) 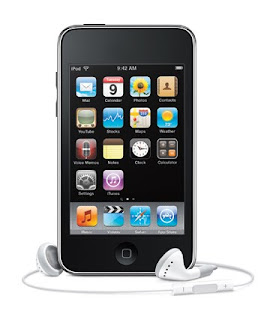 The funds are there, so the wife and I will very soon be the proud owner of new iPod Touches. Yes, the Touch, and not the iPhone. She has her phone through work, I renewed my contract with a new phone last year, and we’re both happy with our provider (Verizon) besides, so we don’t need iPhones. The lack of a camera on the Touch is sad, but hey, we can deal. I’ll just be excited to Twitter and Google and find restaurants and play games and get directions check Facebook and, yeah, listen to music, on the go.
Which brings me to my point (and I do have one). Somewhere along the line, we started living in the future. I can’t pinpoint exactly when this happened, as there certainly wasn’t any formal announcement that I was aware of, but it did happen. We don’t have flying cars, personal robots, Elroy Jetson rocket belts, Martian resort hotels, teleporters, or TARDISes, but we’re still there, at least as far as anyone for whom the very idea of something like an iPhone would have been science fiction. It’s a ubiquitous gadget these days, sure, but remember that this thing you keep in your pocket and probably play Snood on has significantly more computing power than those giant, room-filling computers of decades past.

It’s amazing. Why don’t we appreciate that more than we do? Has the domain of Captain Kirk or Doctor Who become so commonplace to us now, or are we just spoiled?
at October 26, 2009
Labels: life, tech