How's Who #5: The Mutant Phase 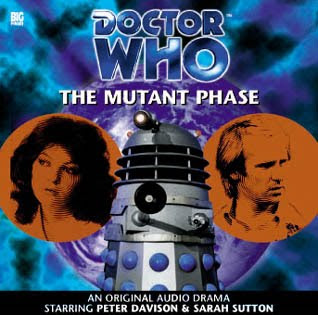 The Plot: The TARDIS is dragged into a time corridor that deposits it first on 22nd century Earth during the early days of the Dalek occupation, and then Earth again in the 43rd century after some great disaster has wiped out nearly all life on the planet. Daleks are mutating into something new, bizarre, and deadly, and have been driven to the point of seeking out the aid (in their usual charming manner, 'natch) of their oldest enemies: their ancient planetary rivals, theThals, and the Doctor himself. The secret to dealing with the Daleks ' "mutant phase" lies in both of these eras, but the Doctor's problems are even greater than being forced to work with his worst enemies or being asked to alter history. Strange things are happening within the very fabric of time, and the Doctor, Nyssa, and everyone else find themselves in "a very bad place to have a paradox."

The Thoughts: Yes, I know, this is one of the Big Finish audio adventures and not an episode of the TV show. For some, this is a shocking breach of "canon," I'm sure. But you know what? Fuck canon. The TV show, the audios, the novels, the comics... everyone has their own idea of what counts and what doesn't, but I can't be bothered to get caught up in all that hand-wringing. Trying to establish a "official" canon for a series as lovably inconsistent as Doctor Who is a fool's errand, anyway. If you like it, it counts.

Anyway, this was my first experience with the Big Finish version of Who, or first full one, anyway (I heard a chapter or so of The Sirens of Time about 8 years ago, and a short Sylvester McCoy story on the BF podcast, but that's been it until now), and I was impressed right out of the starting gate. I think I was mostly afraid that it would come off sounding like an audio book, or a recorded stage play (which is why I never took to those Alien Voices things all those Star Trek people did), but it sounded, even felt, like an actual episode of the show without any of the pictures, and yet it wasn't at all like just listening to the audio track of an episode from the next room or whatever, because my imagination filled in all of the visuals in a way that even the best of Old Time Radio has never been able to make me do. And honestly, I think the lack of visual information is a real strength here; there are no cheesy costumes or wobbly sets to distract people from the story, so the buy-in comes much easier. 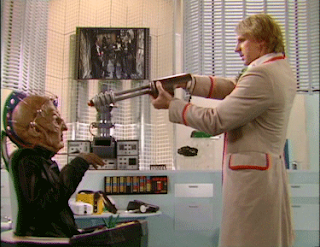 And it didn't hurt that we get a Dalek story that, for once, isn't just another invasion or inter-faction squabble (and no Davros!). Pitting them as the victims, making them fearful to the point of seeking aid from their hated enemies (well, forcing said enemies to help them, but that's a "six of one..." sort of thing inDalek terms), that's a simple, but thoroughly welcome, inversion of the formula.

The only thing that took some getting used to was listening to Peter Davison and Sarah Sutton. Their performances were fine, maybe even better than they ever were on the show, but they do both sound older. Makes sense, it has been nearly 30 years since the originated the roles and all, but still, listening toDavison's somewhat deeper and certainly raspier voice did take me out of the story for a second when the Doctor and Nyssa enter the story. It was easy enough to get over, and in no time it was 1982 all over again. They re-inhabit their parts with such ease that it hardly seems like they left. And rapport between the Doctor and Nyssa was quite nice... not the sort of thing we ever got to see much on the show since the TARDIS was packed with companions in the early 80s. Without Tegan there to shrill things up, they really make quite a good team. 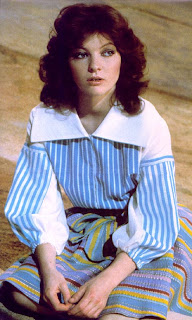 Overall: The Mutant Phase is as good as any TV story from Davison's original run as the Doctor (better than most of them, I dare say), and is now quite probably my favorite Dalek story ever. I don't know why I've waited so long to give the Big Finish audios a try, but I'll be correcting this oversight as often as time and funding allow (especially since downloads off their website are much cheaper than getting theCDs).