How's Who #4: Attack of the Cybermen 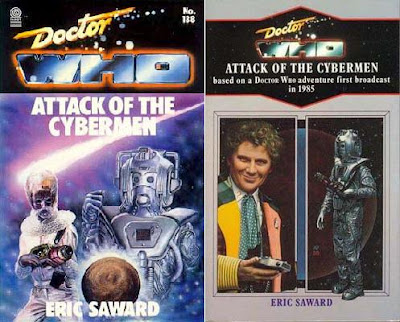 The Plot: The Cybermen concoct a rather convoluted plot to change history and prevent the destruction of their original home, Mondas. At one point or another it involves a stolen time vehicle, Halley's Comet, a diamond heist, the mercenary Lytton (from the Fifth Doctor story Resurrection of the Daleks), a couple of sets of shmoes in way over their heads, and, inevitably, the Doctor, who may or may not have been manipulated into involvement by the Time Lords. In the midst of all this we get a lot of callbacks to past stories (especially early Cybermen stories like The Tenth Planet, Tomb of the Cybermen, and The Invasion) and a whole lot of people get blowed up real good.

The Thoughts: A lot of people associate the Sixth Doctor's tenure with violence, bitchiness, yelling, script editor Eric Saward's fetish for mercenaries, a tendency to dwell in the past, Casiotone soundtracks, and bad, bad costumes. Attack has all of these in spades, to such a degree where even a Sixth Doctor apologist like myself has a hard time saying that people are overexaggerating, and this being the start of Colin Baker's first full season as the Doctor (having oddly had his post-regeneration initial story the season before), it definitely sets a tone for the episodes to follow that's hard to overcome. 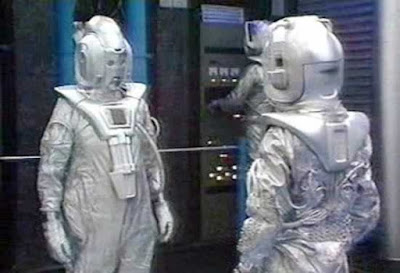 But even if you somehow ignore the tonal issues, what's left still isn't very good. For one thing, the time frame in which this all takes place is hard to nail down. This clearly takes place after Tomb, which takes place in the far future, but then someone will say how Halley's Comet is nearing Earth "even as we speak," which would indicate that everything is taking place in 1985. But the Cybermen still need their stolen timeship to knock the comet into the Earth. Not to mention they want to turn a giant cosmic snowball into a bomb, which is sketchy even for Doctor Who science. Presumably it'll involve the frozen explosive Cryons (I'll get to them in a sec) keep talking about, but this is never stated, or even implied. The whole thing is kind of a mess. An attempt to craft a layered story where several independent threads will eventually merge into a cohesive whole just ends up being a five-subplot pile-up, TV writing as a traffic accident.

Odd character development, too. Whereas the Sixth Doctor is often pompous, here he's just downright mean at times, and shockingly quick to take a life. The Cybermen are practically bipolar, being nigh-invulnerable, cold, and calculating at some points, weak and actually fearful (odd for a race where emotion has been removed) at others. And the Cryons. Oh, the creepy, creepy Cryons. Bad enough that they're all wispy and sing-songy and touchy-feely like they're interstellar pre-school TV hosts. But for characters so integral to the plot, they're introduced far too late into the story for us to make any real connection with their plight. 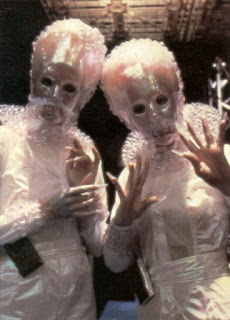 About the only person who comes off well at all, really, is Lytton. Interesting cat, multi-faceted personality, and an all-around great performance by Maurice Colbourne. He brought a lot of much-needed awesome to the story, but that shouldn't come at the expense of everyone else, including the title character. The show's called Doctor Who, after all, not Lytton.

Overall: Attack of the Cybermen is a big ol' mess, there's no two ways about it. It has some fun moments here and there, mostly concerning past continuity - the TARDIS arriving in the I.M. Foreman junkyard from the very first story, Peri's complaint that the Doctor has alternately referred to her as Susan, Tegan, Sarah Jane, Jamie, and even The Terrible Zodin - but they just make the rest of the story even more disappointing by comparison. But at least Colin Baker's tenure (mostly) improves from here on. 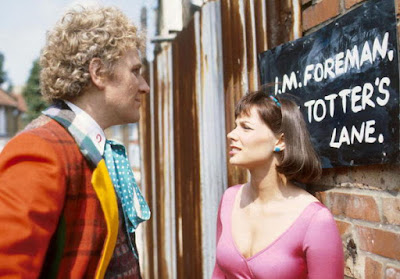 A Brief Word About Peri: Nicola Bryant comes across as a lovely, warm, and friendly person in every interview I've ever seen or read, so I went to great lengths to avoid saying how much I kind of hate Peri, her ever-shifting accent, and her bad costumes, and how I think that the character's only true saving grace is that she came in between Tegan and Mel, the Alpha and Omega of Shrill.

Except for just then, of course. Shit.

(And no, I'm not going to post The Bikini Shot from Planet of Fire. You've got Google. Use it.)
at October 04, 2009
Labels: Doctor Who, How's Who, TV
Newer Post Older Post Home