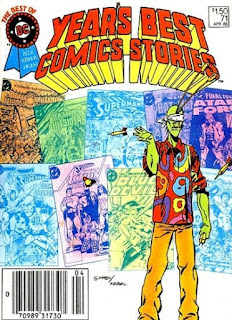 Bought at: Mr. Paperback, Airport Mall, Bangor, ME (pretty sure of this, anyway - Mr. P was certainly my comic stop of choice in the days before Bangor got a direct market comic book store of its own)

So far every other book in this (long ignored but not forgotten) series of posts came into my hands between the ages of 3 and 5. This one fell into my hands when I was 10, and it was both mind expanding and far too much for me to handle at the time.

I hardly ever picked up the DC digests, and was firmly entrenched in my Marvel Zombie phase besides, so I'm not even sure what prompted me to want this. Maybe there wasn't anything else on the rack that interested me (or I didn't already have). So I lobbied for this, and though my parents balked at the $1.50 price tag ("Almost 2 bucks? For a funny book?!?"), I won them over with the argument that I was, in fact, getting many comics for the price of two... what a bargain! They caved, and I brought this home for a night's worth of enjoyment.

One night became two, which became three, and so on. See, there was a lot going on in this particular crop of DC's best comics stories of the previous year. Some of it was pretty straightforward. There's a light-hearted story about Bruce Wayne trying desperately to grab a few hours of sleep after a long night as Batman and being thwarted by his various love interests (Vicki Vale and Julia Pennyworth) and a parent-teacher meeting at Jason "Pre-COIE, So Not Yet a Tool" Todd's school (fantastic Gene Colan art in this, IIRC). A cute "Tales of the Green Lantern Corps" story about a single mom GL trying to juggle her Corps responsibilities and mom duties. There was an Ambush Bug thing, Blue Devil taking a road trip with the Trickster, Superman teaming up with Adam Strange, and the infamous (and hilarious) "Hukka vs. The Bob!" back-up story from Atari Force.

Then there was a second tier of stories, stuff unlike anything I had read before, stuff which alternately confused me, challenged me, and in at least one case, haunted my dreams. The story that did the latter was a story called "The Day the Earth Died!," in which Superman considers taking nuclear disarmament after a particularly vivid dream of man-made armageddon. Those first few pages depicting the dream were the most terrifying comic book images I had ever seen, and they bother me to this day. Superman wandering through the ruins of Metropolis, confronting the young survivor who decomposes before his eyes... gah. Right up there with The Day After for nightmare fuel. And seeing as I spent most of the mid-80s convinced the governments of the world would make damn sure I wasn't able to grow up, that sort of story I didn't need. I still remember it vividly 23 years later, though, so they had to have done something right.

The other stories that effected me, though... well, let's just say they comprised my introduction to Alan Moore. First was his famous "Tales from the Green Lantern Corps" short "Mogo Doesn't Socialize." I'm not exaggerating when I'm saying this story enthralled me. I must have read this one dozens of times that year. The slow build of the planetwide search for Mogo, and then the reveal that - BAM! - Mogo is the planet... that just killed me with awesome. A simple concept, brilliantly executed, with a twist that'd have made Rod Serling or the EC crew proud. That's still one of my favorite stories of all time.

Mr. Moore's second entry in this book was one of his "Vega" stories from Omega Men, "Brief Lives." I can appreciate the story now, but at the time, the idea of an entire civilization starting, growing, and ending at the feet of two monolithic beings who perceive time so differently that eons covered in the story are just a mere moment to them, yeah that one was a little over my head. At that point, I was still under the impression that Secret Wars 2 was alright, you know?

And then there was the story that was originally printed in Swamp Thing #34, "Rite of Spring." The story better known to the world as "that one where Abby eats the funky vegetable produced from Swamp Thing's body and they have acid trip mind sex." Now if the Superman story scared me (scarred me, even) and the Vega thing confused me, then you can bet there was no way in hell that I was ready for this one. It was far beyond anything I was ready for mentally or emotionally, and I very quickly got the impression that if my parents knew I was reading this, I'd get in really big trouble.

Consequently, I read it a lot. At first mostly for the thrill of getting away with something (and I was such a whitebread, goody two-shoes kid that this was the height of rebellion for me). But even after that faded, I still went back to this. I didn't really get it - well, I mean, I had an inkling or two of the basic goings-on - but there was something in the not getting it that appealed to me, that maybe not being ready for it was at least part of the point. For me, specifically, if not for Mr. Moore's authorial intent.

Basically, it was nice, maybe even important, to get a glimpse of comic books beyond super-heroes and talking animals (or talking animal super-heroes). I knew I had to stick with these things at least long enough to figure out what was going on in "Rite of Spring."
at October 15, 2009
Labels: comics, DC, Getting Hooked, Swamp Thing
Newer Post Older Post Home