So may I introduce to you, the act you've known for all these years. 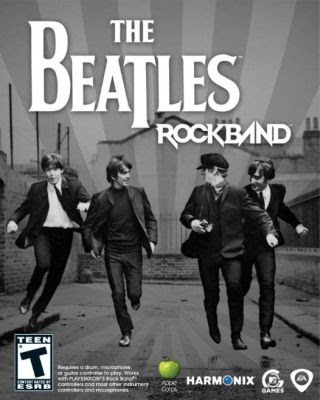 I can give or take Rock Band (and Guitar Hero, for that matter). The games are certainly fun enough for a while, but as I'm generally lacking in rhythm, timing, and dexterity, anything above "Medium" level is an exercise in frustration and futility (and if I'm being honest, I can only hit Medium with any consistency on my very best days). Not to mention I hate to suffer though songs I only kind of like to get to the music that's actually fun to pretend to play.

We had a chance to play The Beatles: Rock Band with friends on Saturday night, though, and that was a whole 'nother ballgame. Don't get me wrong, the game play is still the same. I'm all thumbs on the guitar parts above a certain point, and I am absolutely hopeless on the drums (even without the foot pedal, which to use properly requires ankle muscles I was heretofore unaware of). And yet, it's still fun, and 100% of that is due to the music. Like most of humanity, I've been singing along - and often playing along in the air - with the Beatles all my life, so the idea of not even just pretending to play along with them in The Cavern Club, at Shea Stadium, on the Apple Corps. roof, etc., but actually being them, that's a powerful experience right there.

And it doesn't hurt that the game both sounds and looks amazing, either. The money put into remastering the tracks and creating top notch animation for the cinematics was well-spent. Take a look for yourself if you haven't already.

We played through the majority of the game in one night, and I still can't wait to play again. Yeah, I'm gonna need this at some point.
at September 13, 2009
Labels: music, The Beatles, video games
Newer Post Older Post Home