Sherlock Holmes and the Adventure of the Four Color Publishing Glut

Apparently Sherlock Holmes is the new zombies. Or monkeys, pirates, ninjas, or whatever other flavor of the month comic book trend to come down the pike in the last 10 years. In the current (September) issue of Previews, there are Holmes-related projects solicited from four different publishers.

Must be nice for publishers when someone makes a movie about a public domain character, huh? Nothing like a bandwagon that doesn't require much in the way of licensing fees.

For the traditionalists, there's IDW's Sherlock Holmes hardcover Vol 1., which adapts stories like A Study in Scarlet and The Adventure of the Speckled Band, to name but two, with art by Kelley Jones and an Ashley Wood cover: 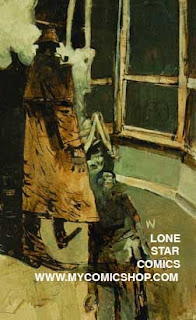 so you know that'll look nice.

If you want some horror with your Holmes, there's Moonstone Books' reissue of The Sherlock Holmes Mysteries Vol. 1: 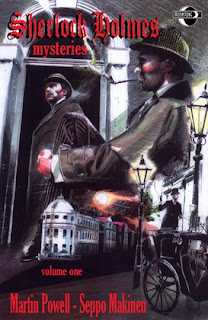 which reprints stories where Holmes fights Dracula and the Invisible Man. Moonstone books rarely catch my eye, but this actually sounds pretty cool. Anybody out there who has read this care to share their thoughts? 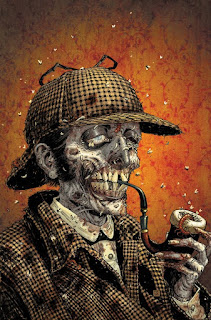 And then there's Antarctic Press' entry into the derby, Sherlock Ninja.

Let me say that again. 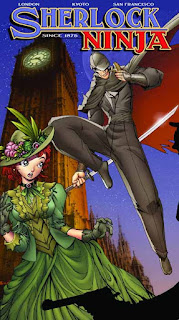 This will either be awesome or terrible. Possibly both at the same time. Am I getting this? You better believe it.

(And, if I'm being honest, I'll probably cave and get the zombie thing, too.)

And these are only the books set to be released in November. You have to figure there will be even more product as we get closer to the movie's Christmas release date. There will probably be collections of the Dynamite Entertainment mini-series by Leah Moore and John Reppion, Moonstone's Sherlock Holmes/Kolchak the Night Stalker, and I'd be shocked if there wasn't some official tie-in to the movie from someone. And I remember seeing the Ian Edginton and I.N.J. Culbard Hound of the Baskervilles adaptation resolicited by Sterling Publishing in last month's Previews.

I'm not complaining, mind you. As a person who enjoys both comic books and Sherlock Holmes stories, I'm pretty excited. But trying to find room for this stuff in my budget? That's a three pipe problem in the making.