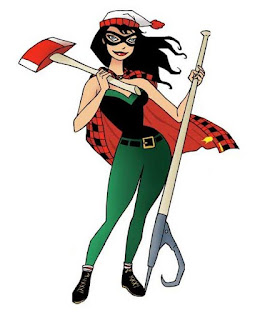 So besides the fact that I came away with a monster cold, I'd have to say that BangPop! was a successful show, and more to the point, a fun one.

(And if I'm being honest, I suspect I actually got the cold from my parents, but given the sheer amount of Con Crud that gets passed along at each and every show - remember, PAX was apparently giving out free samples of H1N1 to attendees this year - it's not beyond the realm of possibility).

I think its greatest strength was in the creator-to-dealer ratio. There were a handful of dealer booths, but an artist alley of a dozen or so creators, and then tables for the special guests besides. This is very unusual for a show in Maine, small or large, and provided a unique experience for the attendees who don't or can't go to larger shows. You can buy comics and books and tchotchkes just about anywhere. Getting decent face-to-face time at most shows in Maine, which are historically dealer-heavy and have few, if any, creators in attendance, is a rare and wonderful thing, and I hope people took advantage of it.

I certainly did. I had a nice conversation with Raina Telgemeier and Dave Roman almost as soon as I got there (they had a primo door spot) and walked away with a nice, fat stack of mini-comics from them (I am honestly very excited about finally getting my hands on some Teen Boat issues). I talked with Josh Alves for a while, because as luck would have it he used to work with my dad, and picked up his book, The Araknid Kid (which originally appeared as a Zuda entry), and a fantastic sketch card of Captain Marvel, Jr. that I'm sure will be a Pretty Sketchy entry ASAP. And I spoke for a long time with Ron Fortier about meeting him at a show WAY back around 1990, his Green Hornet and Popeye work, Stephen King, the return of his Mr. Jigsaw character, and the possibility of his trying to get it listed as part of DCBS' First Light program in order to get it into the hands of more readers.

And, yes, I bought my share of comics and books and tchotchkes, too. That many fifty cent bins, you're gonna find something worthwhile.

And all that was just in the few short hours I had. I wish I could have hung around to see some of the cosplay (though I sincerely wish I could've seen a lot less of the fat angel dude. *shudder*) or the screenings, or taken the kiddo to Kids Day, but Maine trips are usually jam-packed with activities, so I was happy to squeeze in as much as I could. And even as short a time as I was there, it was time well spent. Kudos to all involved. Looking forward to seeing what the future holds for this event.

Check out the local newspaper write-up here for more info and some pictures of some surprisingly awesome Transformers costumes and an old friend of mine dressed up as the show's mascot, Lumber Jill.
at September 22, 2009
Labels: Bangor, BangPop, comics, cons