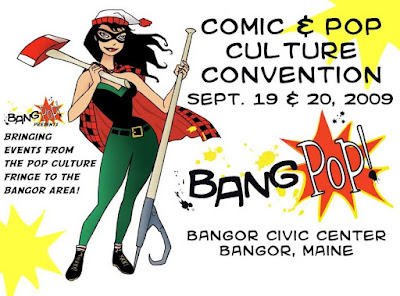 If you're anywhere near the Bangor area the weekend of September 19th & 20th, you should definitely check out BangPop! 2009, the biggest comics and pop culture event to hit the area in quite some time. Guests announced so far include Raina Telgemeier & Dave Roman, Jay Piscopo, and World Fantasy Award nominee Catherynne Valente, with more to come, and programming includes panel discussions, educator workshops, anime and film screenings, gaming, cosplay... the whole nine yards. And Sunday is Kids' Day. Visit the official site for more information.

I know the people running the show, and they're good folks who are knocking themselves out to make this as great an event as possible. But even if I didn't know them, I'd still make the effort to go because last year's inaugural con is said to have been a blast, and it's been far too long since there's been anything this geeky cool in my old hometown. So check it out, troops!
at September 07, 2009
Labels: Bangor, BangPop, comics, cons