Short(ish) reactions to recently-read (if not always recently released) comics. Might be spoilery, so read with caution. 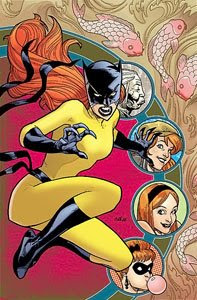 Patsy Walker: Hellcat TPB - I'm going to come right out and say it: this was one of the most flat-out enjoyable Marvel comics I have ever read. Kathryn Immonen's take on the character is fantastic: she's charming, engaging, intelligent, funny, and best of all, frequently flummoxed but never outwitted. And the stories themselves are great fun, too. The book opens with her serial from the most recent iteration of Marvel Comics Presents, and it's light but an interesting and unique look at the many facets of the character, and the art by Kathryn's husband Stuart is great as always.

The rest of the book features her recent mini-series, again written by Kathryn but with art by David Lafuente. Patsy is appointed to be the one and only member of Alaska's 50 State Initiative team, so it starts like it's going to be Northern Exposure with super powers, but events quickly escalate, and demon polar bears, animal spirit guides, and an allegedly kidnapped future shaman quirkily turn her assignment into anything but boring. The story is never what you expect, and is always fun, due in large part to Kathryn's unrelentingly irrepressible Patsy. I was worried Lafuente's art wouldn't measure up to Stuart Immonen's, but he's the perfect match for this story, ably balancing the dramatic and humorous moments with just the subtlest changes in style, his work often reminding me of the half-way point between Takeshi Miyazawa (from Spider-Man Loves Mary Jane) and Sam Kieth.

Long story short (too late), Patsy Walker: Hellcat was not only a great read, but a fantastic ride, and if Marvel lets Kathryn Immonen write more Patsy stories, I'll be first in line.

Batman: Tales of the Demon TPB - I've been on a Bronze age Batman kick lately, and somewhere along the line it occurred to me that although Ras al Ghul as long been one of my favorite Batman villains, I've read very few of the original stories (in fact, most of what I know about Ras comes from Batman: The Animated Series, which loosely adapted several of the stories in this book). And while this was a fun read, it shocked me how... well, genial Batman's initial relationship was with a known international criminal who named himself The Demon's Head. Yeah, he's smart enough to figure out Batman's identity, he has a smoking hot daughter, but still, what you'd expect to see as begrudging respect comes out as downright pally for a surprisingly long time.

Also, though Denny O'Neil is credited as returning Batman to his darker, creature-of-the-night roots, the dialogue coming out of the Dark Knight's mouth is still pretty hokey. O'Neil's Batman is just as likely to call someone "chum" as Adam West's, make no mistake about that. These quibbles aside, though, a fun read, particularly if you like a Batman who's as much "international man of mystery" as "dark knight detective," and some fantastic artwork from such 70s mainstays as Neal Adams, Michael Golden, and Irv Novick.
at August 02, 2009
Labels: Batman, comics, DC, Marvel, Patsy Walker, The List