Don't You Forget About Him 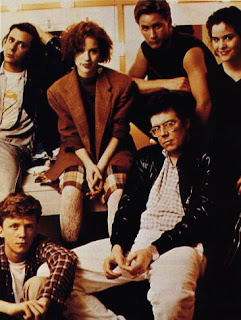 Now, I don't quite have the reverence for Hughes' movies that much of my generation does, mostly because my parents were pretty strict about movie ratings for most of my youth. Trying to see PG-13 movies before I was actually 13 took enough subterfuge and legerdemain as it was; trying to sneak R movies, even up until age 16 or so, required a lot more effort than was usually worth it, so the only Hughes movie I ever lucked into seeing when it was pertinent was Ferris Bueller's Day Off.

Also, it always bugged me that for a director being renowned as being "pro-geek," a lot of the geeks in his movies really got the shaft - Brian gets stuck writing the paper for the rest of The Breakfast Club, Cameron's gonna get the crap kicked out of him by his dad while Ferris gets to make out licky style with Mia Sara, and Ducky, well, the Duck is pretty much well and thoroughly screwed over by Molly Ringwald, isn't he?

But all of these are my hang-ups, and in spite of them, I still enjoy, maybe even celebrate, the John Hughes oeuvre. And I use the term oeuvre completely free of irony, because when you're a filmmaker whose work literally helped to define an entire generation of American teenagers and whose influence is still felt to this day, then yeah, you've earned the right to high-fallutin' French words.

So long, Mr. Hughes, and thanks for the movies. Even if I came to them too late and maybe didn't always appreciate (or maybe just misunderstood) what you were trying to say, you usually managed to entertain me, and that counts for something.
at August 06, 2009
Labels: John Hughes, movies